THE rise of craft beer and the resurgence of cask ale have helped reignite on-trade beer sales in recent years.
But with these products now so widespread, how long until they have crossed the line and into the mainstream?
Brewers contacted by SLTN said the crossover may be closer than you think. 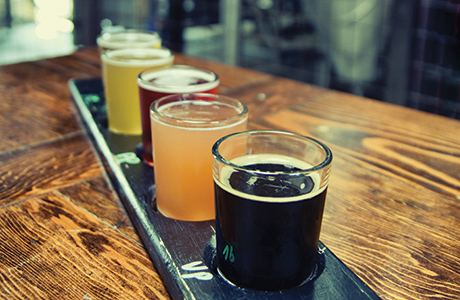 Steve Stewart, founder of Edinburgh-based Stewart Brewing, said demand for craft is still growing “as more people start to awaken to craft beer”.
“There is still a long way to go to when your everyday beer drinker is aware of all the brands, choice, quality and variety of Scottish craft beer available,” he said.
“In essence ‘craft’ is becoming more available in the mainstream.”
Andrew Richardson of Black Wolf Brewery said the broad range of beer now available to consumers is, in itself, helping to drive interest.
“Consumers are now getting a huge and varied selection of great beers to try, and more and more drinkers are taking an interest in their beer and are trying and enjoying craft beer,” he said.
There is a huge range of beer brands and styles for publicans to choose from now, and while innovation continues in the category, there are some proven favourites, according to Heather McDonald of WooHa Brewing.
“IPA and porter are quite popular,” said McDonald. “[And] interest is growing in sours.
“Breweries will continue to experiment and create new brews, but the traditional styles should remain strong.”
Andrew ‘Barney’ Barnett of Barney’s Beer agreed that IPA is set to continue as the dominant style in craft beer, and highlighted the breadth of range available to publicans within the style.
“IPA and pale ale will continue to be the dominant style,” he said.
“Within the style there is enough diversity to satisfy lots of drinkers – from sessionable refreshing pints (not too far away from lager) to heavily hopped beer for those wanting more flavour.”
When it comes to ranging IPAs and other craft beers, Barnett said licensees should “know their audience” and suggested including some “more accessible IPAs” as a “good way in” to the category before moving on to other styles.
Gordon Muir, brand manager for Belhaven, echoed Barnett on ranging.
Muir said that, like any category, the key to craft beer is “knowing who you are stocking it for”.
“If it is to offer a trade-up alternative for your existing customer base then it makes sense to introduce one or two beers that are just a step on from the beers that they are currently drinking,” said Muir.
Where craft beer may diverge from mainstream beers is in the frequency with which the products should be changed.
Richard McLelland, sales director at Williams Brothers, said customers will expect to see regular differences.
“Most customers expect for taps to rotate as they are aware of the vast variety of craft beer being introduced into the market, while still desiring their favourite local craft beers to be available to enjoy,” he said.
Bob Hogg, commercial director of Inveralmond Brewery, agreed and said that due to the nature of the craft industry, with many brewers using small-batch production methods, “consumers expect some level of change in the craft beer selection and, in fact, welcome it”.
Despite this, Hogg said that “increasingly, we are seeing a move towards outlets having a more consistent year-round selection on offer too”, which is “less driven by season and fashion, but more by consumer demand”.
The challenges of craft beer ranging also apply to cask, another style of beer which is big on variety.
Andy Maddock, managing director of Caledonian Brewery, said the right cask ale range “is individual to each licensee and the type of premises”, and advised operators to consider the volume they expect to sell.
“Once cask ale has been tapped, it only has a few days at its best and with this in mind, if operators are new to cask ale a smaller offering would be the ideal option and they should ask for advice on best practice,” he said.
“For outlets more familiar with cask ale, try to achieve a balance between well-known and unusual, including permanent and guest beers.”
Publicans can put the right range in place, but that’s only one half of the puzzle to boosting beer sales.
Operators also need to entice consumers into their venue and for that, Kenny Webster at Isle of Skye Brewery suggested going digital.
“We’ve found that being active on social media has had a profound impact on the business and would encourage outlets and brewers alike to make as much use of the resource as possible,” he said.
Social media is a “great platform” for publicans to showcase their range, Webster said, and publicans can boost this further by hosting craft and cask beer events.
“With the more discerning customer base, it can be a good idea to offer ‘meet the brewer nights’ where consumers can learn about the brewing process of their favourite beers, and of course ask questions while sampling,” said Webster.
“Again, these can be promoted through social media channels.”
Beer-themed events were also highlighted by Seb Jones, managing director of Speyside Craft Brewery, who recommended educating staff to allow them to participate in such events.
“Many bars have started to hold tasting events and introduce beer sommeliers/brewers to customers, enhancing the high-end experience of the product and increasing the range on tap,” said Jones.
“Investing in staff that know about beers and understand their customers is a major element in making this work in terms of increasing footfall and sales.”