There’s a new man at the helm of the kitchen in Glasgow’s Blythswood Square hotel after Zoltan Szabo was appointed executive head chef. 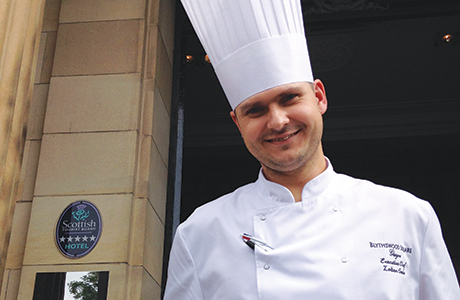 The Hungarian-born chef, who has worked in Scotland for over a decade, comes to the role with previous experience in kitchens across the country, including at Cameron House and Glasgow’s Grand Central Hotel.
Szabo joins the Blythswood team with a number of accolades under his belt including the Scottish Chef of the Year Bronze award, which he picked up two years running.
Szabo said he is “extremely proud” to be taking on the new role.
“I have a fantastic team of extremely talented chefs who will be integral in helping me serve some of the best cuisine [Glasgow] has to offer,” said Szabo.