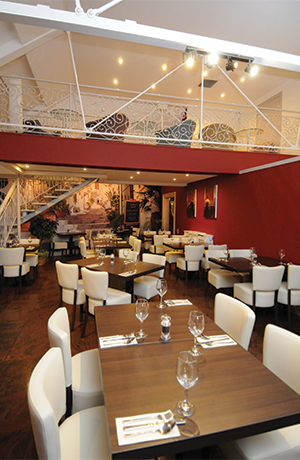 An array of crimson tables and chairs on Edinburgh’s Lothian Road guides pedestrians towards one of the latest additions to the capital’s dining scene – Italian cafe, bar and kitchen Milano.
The new restaurant, which opened its doors in time for this year’s Edinburgh Festival and Fringe, is the result of a one month overhaul of the unit’s interior.
On picking up the keys to the venue, which previously housed another Italian venture, Dario’s, the team behind Milano got to work on making the premises their own.

Owner Giuliano Della Nocchi said the aim of the refurbishment was to create a “contemporary Italian” venue – a result which Clydebank-based design firm New Concept helped to deliver.
Sandro Formisano of New Concept said that when the project started the unit had been “left as an authentic traditional Italian” which “we wanted to bring up to date”.
The New Concept team set about brightening the venue by installing new lighting, which Formisano said “made [the restaurant] a lot brighter and more inviting”.

A new, fully refrigerated bar was also installed complete with red leather panels on the front and an illuminated granite bar-top and back-bar.
The restaurant was furnished with dark wood tables and cream chairs, while a false wall was constructed to conceal the toilet doors from diners’ view.
The frontage at Milano was also revamped “for the same reasons” as the interior, Formisano said.

Milano’s entrance features a new colour scheme and new signage.
In addition to cosmetic changes to the unit, New Concept also suggested a change to the mechanics of the restaurant by shifting the kitchen’s dumb waiter and hatch further back from its original location by the front door.
While the refurbishment was steered towards the modern, Milano’s interior still pays homage to its Italian heritage with murals of the Mediterranean peninsula on display throughout the restaurant. 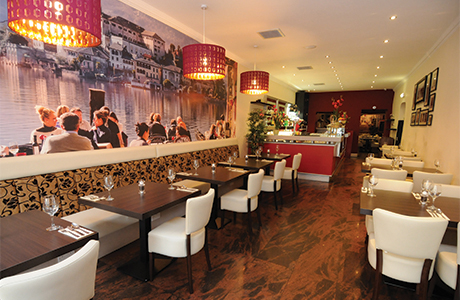 The end result is a dining venue catering for upwards of 80 covers, spread over two rooms with a seated mezzanine and an al fresco dining area.
The contemporary edge applied to the venue’s interior has also made its way onto the Milano menu, which goes beyond Italian cuisine by offering some staple dishes from further west.
All the Italian classics are on offer at Milano but it’s a menu which aims to offer “a bit of everything”, said Giuliano, with a wide variety of dishes including crowd pleasers such as burgers and ribs.

The food offer may be global, but when it comes to ingredients, the team behind Milano has gone local with their supplier list.
Scottish meat is sourced from Campbells, whom Giuliano described as a “very efficient company” while Italian ingredients including wine are sourced from West Lothian-based supplier Continental Quattro Stagioni. 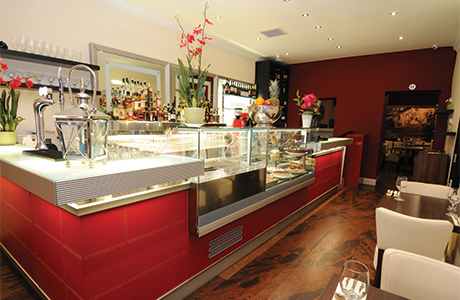 While Giuliano, a seasoned restaurateur, may be backing the restaurant, Milano is managed day to day by his son Antonio and management partner Carlo Bimanti.
With Milano opening shortly before the onset of this year’s Festival and Fringe, it could be said that Antonio and Carlo have been given a baptism of fire into the world of Edinburgh restaurants – but Giuliano reckons his son has handled his new responsibilities well.
“I think [Antonio] got a bit of a shock [when he started], but they do a good job,” he said.