Walking into Two Fat Ladies at The Buttery is like stepping into a bygone era. 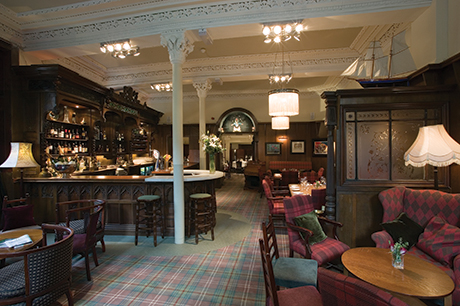 Intricate cornicing and dark wood panelling are paired with traditional-style furniture and plaid fabrics; and there’s a distinct air of calm about the Glasgow eatery, which is owned by Ryan James.

It’s an ambience which helped the 60-cover venue clinch the SLTN Restaurant of the Year (Fine Dining) Award for 2014, sponsored by Bunnahabhain.

Ryan said he was thrilled to win the coveted SLTN ‘corkscrew’ trophy, having previously been a finalist in the category; and the SLTN Award now has pride of place on the restaurant’s gantry.

“It was really great to win and the reaction from the room on the night was great,” Ryan told SLTN.

“We’ve been in the final four times, so it was so nice to win.

“I also think it means more if it’s a trade award.”

The accolade is clearly important to Ryan, whose restaurant career began with a job as a waiter at Glasgow’s Rogano, after studying drama at the former RSAMD.

In between acting jobs, he was offered the chance to manage the restaurant – a move which was to alter his career path dramatically and put him on course for a future as a restaurateur. 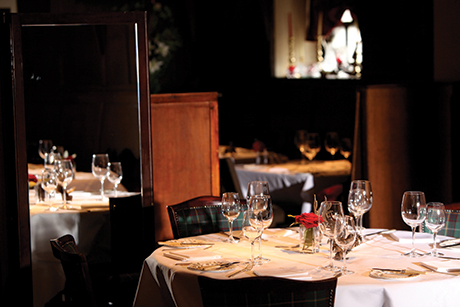 Ryan opened his first and ‘original’ Two Fat Ladies restaurant on Glasgow’s Dumbarton Road  (the group is so-called because the inaugural restaurant’s address was number 88) in 1989.

A second Two Fat Ladies outlet followed in the city centre in 2005. And, two years later, Ryan got the opportunity to snap up The Buttery – a favourite restaurant of his father’s –  on Argyle Street in the Anderston area of Glasgow.

He jumped at the chance and quickly added his Two Fat Ladies style to the long-established eatery, pairing top quality cuisine with a “less formal” ambience.

Despite the grand interior of mahogany, oak and stained glass – and the linen tablecloths, silver cutlery and  vintage crockery – all of which hark back to a bygone era, Two Fat Ladies at The Buttery prides itself in its friendly “unstuffy” atmosphere.

“It’s fine dining, but not in the formal sense, it’s much friendlier than that,” said Ryan, who is also chairman of Glasgow Restaurant Association.

“It’s a celebration place, the kind of place you feel something special is going to happen.

“I would say it’s more fancy Dan than fine dining.

“There’s a perceived value to it because it’s very olde-worlde and old-fashioned.

“But it’s much friendlier than that; people in Glasgow want to have a bit of craic and a laugh with the waiter.”

Relaxed, friendly service has been key to the success of Two Fat Ladies at The Buttery, according to Ryan.

The restaurant employs 40 staff, including kilt-wearing waiters, and customer service is top of the agenda.

“You can make a waiter out of a nice person, but the reverse is perhaps not the same,” said Ryan.

“It’s the attitude that is important, the last thing you want in here is someone who is aloof.

“You really want someone who has empathy with customers and will treat them the same way you would like your mother or your grandmother treated.”

The focus on friendly service is credited with prompting a rise in the number of people coming in for cocktails at weekends; it also extends to The Shandon Belles – the basement bistro at Two Fat Ladies at the Buttery.

And it’s an approach Ryan sought to extend to his fourth restaurant.

In 2013,  the Two Fat Ladies group embarked on its first venture outwith Glasgow, after Ryan signed a partnership deal with the Marine Hotel in Troon, taking the restaurant’s name and concept to Ayrshire.

And he hasn’t ruled out expanding the group further in future, adding that he always has “one or two ideas” that would work in other areas if the right site became available.

“We’ve always got plans and have been talking about Edinburgh; that would naturally be the next place to expand to,” said Ryan.

“But it’s a very different market from here and it’s more about finding the right location.

“If we were thinking of somewhere else in Glasgow it would be the Merchant City or the south side.”