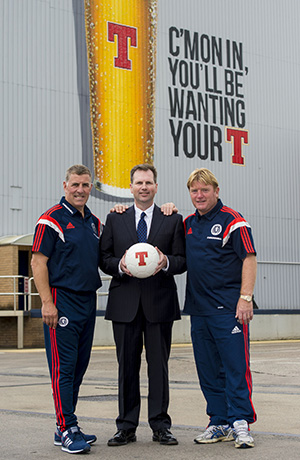 Tennent’s Lager has been unveiled as the new official beer of Scotland’s national football team in a deal that will run through the current European qualifying campaign and the 2018 World Cup in Russia.

The deal will give Tennent Caledonian exclusive pouring rights for its brands, including Black T, Caledonia Best and Magners, at Hampden. Campaigns to support the brewer’s on and off-trade customers over the course of the three-year partnership are said to be in development.

Tennent’s, which will replace Carling as official beer of the Scotland national team, was first associated with Scottish football over 40 years ago, sponsoring the national side’s team picture for the 1974 World Cup finals.

Alastair Campbell, managing director of Tennent Caledonian Breweries, said the brewer is “thrilled to be partnering with the Scotland national side again at what is a hugely exciting time for the nation”.

“[Scotland manager] Gordon [Strachan] and his players have a fantastic opportunity to reach the finals of a major tournament and as a passionate supporter of the Scotland team we look forward to sharing every step of the journey with fans in the years ahead,” said Campbell.