A brewery in Barrhead, East Renfrewshire, is preparing for an increase in demand for one of its core ales after it was named as one of the best beers in Britain. 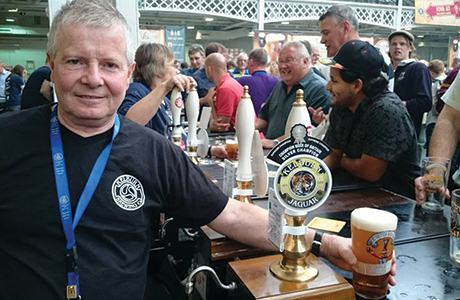 Kelburn Brewery’s Jaguar golden ale took the silver trophy in the Champion Beer of Britain last week, beating beers from across the UK.

Brewery owner Derek Moore said he “cried almost as much as when St Mirren won the cup” when Jaguar’s silver medal was announced.

“We’ve won over 50 awards, and we’ve been in for the finals of the Great British Beer Festival before,” Moore told SLTN.

“We’ve had a bronze, but this is the highest award we’ve had.

“If you think about the number of beers you’re up against and some of the tried and tested breweries – some of which have been there for centuries – it’s absolutely fantastic.”

Kelburn’s previous accolades included an award in CAMRA’s Champion Winter Beer of Britain contest, in 2013, for its Dark Moor beer. The beer won the Old Ale/Strong Mild category and was awarded a bronze in the Overall Champions list.

Moore said he hopes the new award will help to boost the company’s profile south of the border.

“It’s a much bigger market in England and there are people who look for these things and say ‘that was the silver medal winner, we’ll get some of that in for our festival, we’ll take some of that for our pub’,” he said.

“When we won the gold medal for the Winter Beer of Britain (for Dark Moor) our sales went through the roof for a couple of months.”

The competition, part of CAMRA’s Great British Beer Festival, consisted of a number of different categories, including Mild, which was won by Williams Bros Black; Best Bitter, for which Highland Brewing Co won a silver award for its Scapa Special beer; and Champion Bottled Beer, in which Fyne Ales took second place with its India Pale Ale.

Kelburn’s Jaguar won the Golden Ale category and was then put forward, along with the other category winners, for the title of Supreme Champion.

First place was awarded to Welsh brewer Tiny Rebel for its Cwtch (which also took the award for Best Bitter), with Kelburn coming second.

Moore said that, following the CAMRA win, Kelburn will look to introduce a bottle-conditioned version of Jaguar later in the year.