THERE’S been a small Latin invasion mounting in the Scottish on-trade over the last few years, and now a little piece of South America has landed on Glasgow’s Sauchiehall Street with the launch of Mango – a tropical-themed bar, restaurant and club. 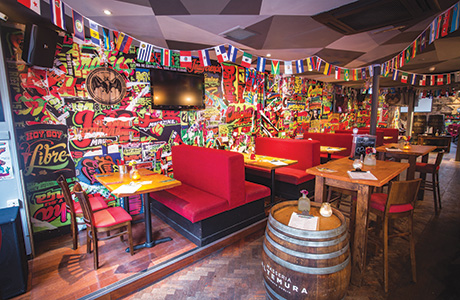 From the team behind Boteco do Brasil, the Brazilian bar restaurant with sites in Glasgow and Edinburgh, the new venue has a broader reach than its
sister outlets, offering a range of South American cuisine, cocktails and cervezas.

Mango opened its doors on May 29 following a revamp of the bar area in the former Juan Chihuahua outlet, however the venture was given a proper baptism last Friday (July 31), with an official launch night now that the rest of the business has started to take shape.

With Mango, owner Luigi Aseni has expanded significantly by taking on a three-floor venue, although he had initially been on the lookout for something smaller when the site caught his eye.

“Basically, we just jumped in when we saw the opportunity,” said Aseni.

“Me and Gary [Hermans, Mango’s general manager, who joined the Boteco team in April 2014] were trying to do something together [since] last year.”

As soon as the contract on the Mango unit was signed, Hermans and Aseni, who previously worked together at The Shed nightclub in Shawlands on Glasgow’s south side, got to work creating a bar area which they believe is “vibrant, cosy and welcoming”.

Vibrant was certainly the aim with the decor at Mango, whose walls have been decorated with South American street art.

The artwork is a ‘cut up’ collage of prints of Peruvian artist Elliot Tupac’s graffiti, recompiled in a design created by Glasgow-based graffiti artist Gaz Mac.

The theme extends to the ceiling, which takes its cues from the favelas of South America.

Sheets of corrugated metal have been laid out in an off-kilter geometric display that’s been brought to life with a lick of brightly coloured paint.

Aseni said the key with the refurb was to create an authentic South American bar on Sauchiehall Street.

“We’re trying to look like a real bar that you can find anywhere in South America,” he said.

Aseni’s commitment to focusing on Scottish and Latin culture isn’t limited to the interior design; it also extends to the food and drink offer.

On the drinks side of the business, Aseni is working with Wallaces TCB to ensure Mango has a strong selection of Latin brands at the beer taps.

The venue’s draught offer includes Brahma, Red Stripe and Estrella, while Aseni said he expects Mango will be the first bar in Scotland to carry Pacifico on draught when the Mexican beer becomes available.

The menu at Mango takes its inspiration from a number of South American cuisines, with dishes from countries including Chile, Brazil, Argentina and Columbia represented.

Food service at Mango currently runs from 12noon until 10pm, but Aseni and Hermans have plans to extend this as business ramps up with the arrival of students for the start of the new term in September.

Mango will be more than a bar restaurant, however.

The Latin-inspired live music and dancing events that are at the heart of the Boteco do Brasil entertainment offer will be replicated at Mango too – but with a little difference.

Salsa will be offered as a staple but will also be accompanied by dances such as Regaton and Kizomba, while customers will be invited to put their skills to use during a range of live performances from a number of South American acts.

“We’re going to try to take our regulars from Boteco on the next step,” said Aseni.