Danish brewer Carlsberg is bringing a ‘craft ale’ range to the UK on-trade which has been named after the firm’s founder, J.C. Jacobsen. 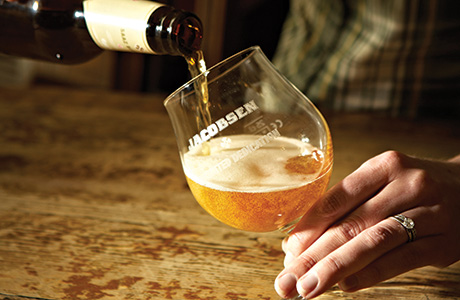 The Jacobsen range was established ten years ago at the Jacobsen Brewhouse at the Carlsberg brewery in Copenhagen and is now being rolled out to pubs, bars and restaurants across the UK.

The ale range comprises two variants which are both available as part of Carlsberg UK’s ‘Crafted’ portfolio.

Jacobsen Saaz Blonde is a 7.1% ABV beer which is said to be brewed according to Belgian traditions using Czech Saaz hops to contribute to a fruity aroma and dry notes of angelica root, clove and coriander.

Jacobsen Velvet is a 5.9% ABV light golden ale which is described as “soft, bubbly and sweet – without bitterness, with a vinuos aroma and fruity notes”.

David Scott, director of brands and insight at Carlsberg UK, said: “The brand was developed to encapsulate J. C. Jacobsen’s philosophy of ‘unlimited dedication’ – the promise to produce premium beers of exceptional quality, which is truly reflected in both the Saaz Blonde and Velvet variants.

“We are delighted to launch Jacobsen into the UK on-trade, and are confident that the brand brings an additional premium dimension to the craft beer opportunity, that is particularly suited to matching with food.”