Swedish cider firm Kopparberg hopes its summer marketing campaign will bring a touch of Scandinavian cool to the UK in the coming months.

The activity – said to be the largest outdoor ad campaign for the brand to date – focuses on its Strawberry & Lime and Elderflower & Lime variants, as well as new Frozen Fruit Cider range. 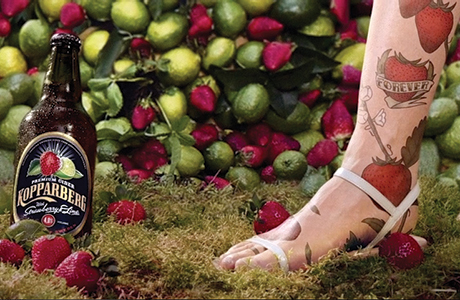 Designed to emulate the blend of the cider’s fruit ingredients, the adverts show male and female models sporting tattoos of vines of strawberries intertwined with limes.

The outdoor adverts will feature at 1900 sites across the UK taking in transport hubs in eight cities, including Glasgow Central.

Other summer activity for the brand includes the Kopparberg Urban Forest pop festival, which will take place in London this month and next, and a push for the recently-launched Kopparberg Frozen Fruit Cider – a 250ml metallic pouch, available in the off-trade, which is designed to be frozen for eight hours, before being squeezed into a glass and consumed with a spoon or wide straw.