Before Dundee-based property developer Richie Hawkins came along, Taypark House – a 150 year old mansion – was being used as office space by the University of Dundee.

But since picking up the keys to the Perth Road property in March 2014, Hawkins has overseen a restoration and refurbishment project which has brought back the building’s original features and created a new licensed hotel for Dundee’s west end. 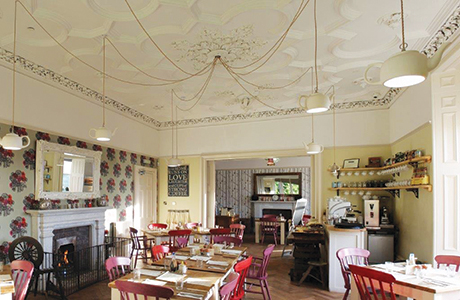 It was a long time coming for Hawkins, who said he had been interested in the property for two years before he acquired it; it was also a welcome return to the hospitality business following a long break from the trade.

“From when I was about 13 I’ve been working in bars and restaurants,” said Hawkins.

“When I was 17 I Ieft home and when I was 19 I bought my first property with a student mortgage.

“I always had a love for working in hotels and bars but I stopped working in bars and restaurants at about 22.”

From that point, Hawkins fell fully into a career in property, however he took his first steps back into the trade after purchasing Balgowan House in Dundee.

Realising the venue was too large for his family to live in, Hawkins turned the property into a bed and breakfast. It was this that prompted him to take on Taypark House. 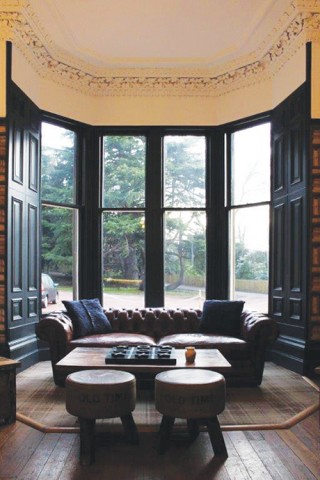 “We just realised from all the comments and feedback [on TripAdvisor] that there was a market for that type of property [in Dundee],” said Hawkins.

“When Taypark came along it was a great opportunity.”

After picking up the keys, Hawkins and a team of contractors got to work on a six month overhaul, transforming the venue from a commercial office space – complete with waist-height power points and strip lighting – to its former state using original floor plans sourced from national archives.

As layers of office fixtures and fittings were peeled off, the building’s history was uncovered.

Scraping off the wallpaper revealed the original walls, from which Hawkins and his team were able to take moulds and restore original features, including picture rails and cornicing. Oak panelling was also remade for the ground floor cafe and bar.

When it came time to lift the old office carpets, the team first found a layer of plywood before uncovering an oak floor which has also been restored.

Hawkins said he made the most of what was there, and paired it with a “modern vintage” design.

“We’ve gone for a bit of a shabby chic, but inviting, kind of look,” he said.

Old met new again when it came to the construction of the hotel’s bar.

After touring half a dozen venues with a measuring tape “to find the ideal height”, Hawkins headed to James Carr sawmill to source timber from a larch tree for the bar top.

The bottle shelves are also made from the same timber, with the addition of some fitted LED lights.

The completed public areas of Taypark House opened on August 2, 2014, while further work was carried out on the venue’s ten letting rooms, which launched on Valentine’s Day this year.

And while last August’s launch left enough time for customers to enjoy the tail end of summer in the hotel’s garden, Hawkins has upped the ante this year with the construction of an outdoor gin bar and barbecue.

The new bar has been made from 1080 recycled wine bottles donated by local residents; the bottles are housed in garden cages with timber from the sawmill again used for the bar top.

Inside Taypark House, Hawkins has opted to go for a dining style that more closely resembles a cafe than a restaurant, with a focus on ‘lean and local’ produce.

Operating with four chefs and three kitchen porters, the venue does its own home baking, offering 15 different pieces each day including four different cheesecakes, all made fresh in the kitchen. 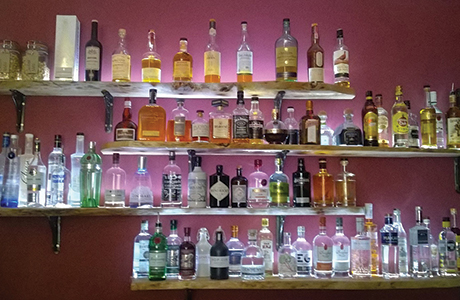 Breakfast options at Taypark House include home made granola with locally-sourced fruit, eggs benedict and florentine as well as the traditional full cooked breakfast.

For lunch, the venue offers a range of soups and ‘gourmet sandwiches’ – and for diners looking to sink their teeth into something heartier, the venue offers buffalo burgers sourced from The Buffalo Farm by Auchtertool, Fife (see story below).

Hawkins said he brought in buffalo to offer diners something different and – like the refurbishment – it’s going down well with the locals.

“We thought that buffalo was nice and a much healthier meat,” added Hawkins. “People do like it, it’s one of our biggest sellers.”