KETEL One is the focus of a new on-trade campaign, inspired by the Dutch family behind the vodka brand.

The Ketel One Vodka Kitchen Experience, which launched in a number of UK bar groups late last month and will be rolled out across the trade later this year, aims to “bring to life” the Bloody Mary through a series of interactive cocktail masterclasses.

Hosted by Ketel One’s mixologists, the events will see consumers invited around a ‘Dutch-style’ kitchen table to create their own Ketel One Bloody Mary and other kitchen-inspired serves using fresh fruit and vegetables, ground spices and other seasonings. 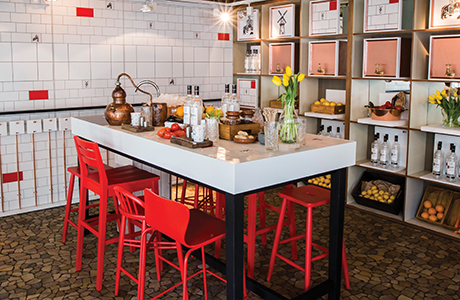 Bartenders will also be invited to take part in a competition which will challenge them to create the “ultimate Ketel One Vodka Bloody Mary”.

David Beatty, brand ambassador for Ketel One, which is part of Diageo’s Reserve portfolio, said there is a “clear trend emerging and an increasing demand for” the Bloody Mary. Working with the bar groups will, according to Beatty, “further cement Ketel One vodka as the perfect base for the Bloody Mary”.

“In today’s busy world, consumers value informal and relaxed quality time with close friends and the Bloody Mary is proving to be a favourite drink for such occasions, especially when served alongside meals and during food occasions,” he said.

“By executing the ‘Ketel One Vodka Kitchen’ in outlets across the trade, we are immersing consumers in an experience that resonates with the heritage of Ketel One, whilst getting them creating delicious, savoury drinks.

“A good Bloody Mary execution can differentiate you as an on-trade outlet as it’s one of the most complex cocktails invented and is hard to get ‘just right’. The liquid credentials of Ketel One combined with quality, market-fresh ingredients make it easier for bartenders and consumers alike to perfect.”