It might be a surprise to readers that the reigning SLTN Mixologist of the Year had never mixed a cocktail until a few short years before she took the title.

Sian Buchan (nee Ferguson) of Edinburgh gin and cocktail bar Heads and Tales is far from Scotland’s longest-serving mixologist, then.

But she’s clearly a quick study.

Having started her career working in the local student union while studying in Aberdeen, Sian was bitten by the bartending bug early.

“You’re going to work everyday and you have fun,” she told SLTN.

“You get to meet so many different types of people on a daily basis. I can’t think of any other job where you literally meet a hundred people in a day and it’s not that big a deal.”

After stints at local bar Siberia and bar restaurant The Braided Fig, Sian joined the management team at 99 Bar and Kitchen, where the team around her helped to ignite an interest in cocktails.

“I think I was three or four days in before they forced me to make a cocktail,” said Sian.

“It was Mike McGinty, who now works at Treacle (in Edinburgh), that took me under his wing and taught me as much as he physically could.

“We’d do things like, as we were doing the stock-take at 99 I’d get him to tell me an interesting fact about every single bottle that we picked up.

“I just tried to always be learning.”

That thirst to learn as much as possible spilled outside of work hours as Sian devoured as much information as she could from blogs, books and visits to other bars.

Experimenting with different spirits and flavours became a favourite pastime.

Sian said: “One of my favourite things to do is find something I really despise and make myself like it through making a cocktail with it. I’ve done it with peanut butter. I’ve done it with beetroot. We have a drink on the menu just now which is basically a gin Collins but with added beetroot juice and grape juice. It’s super tasty. I love it.”

“It’s such a good way to gauge where you’re at,” said Sian. “Am I as good as that guy? Why not? Can I get better than that guy?”

Sian was general manager at 99 when Bruce Hamilton, former Drambuie brand ambassador, approached her and husband Jody about the possibility of relocating to Edinburgh to help him establish Heads and Tales.

The couple had got to know Bruce during their time in the Aberdeen bar scene (Jody is a part-time bartender at Heads and Tales as well as brand ambassador for Rock Rose gin) and knew he was on the lookout for a new venue.

The space now occupied by Heads and Tales, in the basement of The Rutland hotel, had previously operated as a nightclub but had been vacant for some time.

Bruce wanted to reinvent the space as something completely different, and the gin focus of the new bar immediately appealed to Sian.

“I’ve always been a gin fan, since my Braided Fig days,” she said.

“That’s when I branched out to gin instead of vodka. When Bruce said it was going to be gin-focused I said ‘amazing! I’m in!’. 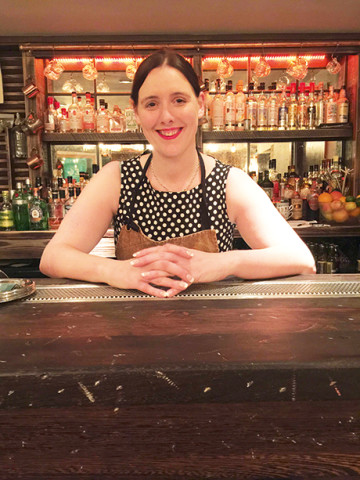 “I’ve always been a big gin fan and I’m perfectly happy to be working with 60 gins at a time.”

The precise number of gins fluctuates from week to week, as do many of the brands on display. Sian said the team stocks up on unusual gins from websites such as Master of Malt, and there’s often a backlog of bottles waiting their turn on the gantry.

But the gins on the back-bar are only part of the story.

A regularly-updated cocktail list boasts around 13 gin cocktails and seven non-gin cocktails at any one time, gin tastings are popular with the bar’s clientele and the venue has also hosted events for brands that include Hendrick’s and Portobello Road.

As if all this wasn’t enough, the bar also houses several working stills, which are owned and operated by Spencerfield Spirit Company, the parent of Edinburgh Gin.

“It keeps us on our toes,” said Sian.

“There’s a big learning curve. I thought I liked gin before, but now I know there’s more to gin than I’d realised.

“I think because there are so many Scottish gins on the market, people in Scotland are really taking notice of it.

“Being able to serve a gin in a nice way, it just gives you something different to a normal spirit mixer.

Fortunately, the spirit is well suited for use in cocktails, said Sian.

She highlighted gins that have particularly strong juniper profiles as among the best to use in cocktails, including brands such as Sipsmiths VJOP – which is a personal favourite.

“If something is really juniper forward, it’s going to stand up well in cocktails,” she said.

“Things like Sipsmiths VJOP, and we have one in called Two Birds.

“They have a normal gin and a cocktail gin, and the cocktail gin is the same recipe but they double the amount of juniper in it, so it stands up better in cocktails. I think that’s a really smart idea.”

The recent explosion in local and small batch gins make this is a great time to be running a gin bar, but Sian is optimistic that the spirit’s popularity isn’t a flash in the pan.

“I think people are definitely more aware of what’s going on in the world of gin, and I think as long as people continue to like gin and be interested in it, the smaller brands are going to thrive because people are going to want to try new things,” she said. “People are a lot less afraid of branching out.”