WORK to build a new 30-bedroom hotel at a country club south of Glasgow got underway earlier this month.

Hotel guests will have access to the country club’s facilities, which include a gym and aerobics studio, squash courts, swimming pool, boardroom, 120-capacity function suite, bar and bistro. 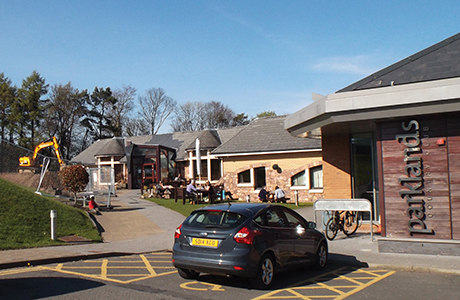 Building work on the £4 million project is expected to take 45 weeks with the hotel due to open in February or March 2016.

Michael Modlin, who has owned Parklands since 1995, told SLTN the hotel has been a “long time coming”.

Plans for the hotel were first mooted around seven years ago but the project was delayed until planning issues for the site, which Parklands leases from East Renfrewshire Council, were resolved.

“It’s taken about seven years to get to this point; we had to go to arbitration to resolve the case.

“I’ve had this planned for years and we got there in the end.”

Modlin said the new hotel will be pitched at the weddings market, as well as catering for corporate and family events; he also hopes to attract leisure business, starting with the 2016 Open Golf Championship at Royal Troon, 25 miles away.

“We’re aiming to tap into the weddings market, offering accommodation for friends and family coming from out of town,” he said.

“Every room will have a Juliette balcony and they’re all five-star standard in terms of size. There’s a honeymoon suite, three executive suites, and an outdoor terrace on the third floor.

“The new function suite will have a bar and there will be a residents’ lounge bar.

“Hotel guests will be able to use the facilities, like the gym and swimming pool.

“We’re aiming to cover all bases. This is the final piece in the jigsaw.”