Interest in brews from around the globe increasing, suppliers say

From the (now scrapped) duty escalator to the rising cost of ingredients and increased competition from drinks such as cider, beer has faced its fair share of challenges in the past decade. 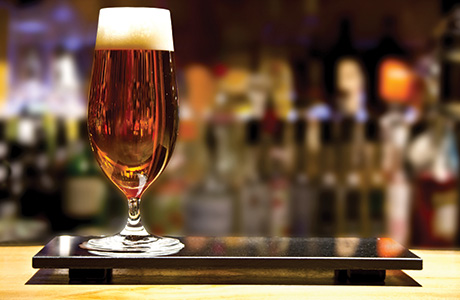 But the category continues to be an on-trade powerhouse, with the British Beer and Pub Association estimating that it accounts for seven out of every ten drinks sold in Britain’s bars and pubs.

And although the UK’s brewing scene is booming, homegrown beers aren’t the only ones proving popular with customers in the Scottish trade.

Drinks firms say world beers are appealing to drinkers in search of quality.

“It’s been happening slowly over the last five years but thanks to the rise of craft [beer] consumers are now starting to look for quality over quantity when purchasing beer,” said Peter Karsten, managing director of importer World Beers.

“With world travel and the local and international craft beer scenes fuelling interest, I think consumers and beer in general are benefiting.”

“People are more interested in experimenting and trying new and different brands,’’ she said.

“I think people also have a greater affinity with international beer brands as visiting new countries and air travel have become more a part of everyday life.”

Producers said operators should stock a range of different types and styles of beer to appeal to both sexes.

“Create a selection that offers beers from different parts of the world,’’ said Danny Wan of brewer Bavaria. “Think about what your clientele like and what they are likely to try, including different styles of beers like American crafts, Trappist beers and flavoured beers.”

The category’s performance in Scotland is “very strong”, according to Wan. “The Scottish population are known for their love of world beer,’’ he said.

And it’s not just about offering a point of difference.

“Whilst world beer accounts for 9.3% volume in Scotland’s on-trade, it represents 13.1% in value terms, so there is much to be gained by providing an interesting, high quality range from countries around the world,” said McGraw.

Graham Archibald of importer Morgenrot reckons the craft beer scene has had an impact on the world beer category.

And he said drinkers are increasingly interested in the origin of beers such as its new McGargles Irish Family range.

“Consumers have become more experimental and are taking a greater interest in where beers are made and with what, therefore the onus is now on pub and bar owners to respond by stocking an exciting selection of canned and bottled beers,” said Archibald.

“I think provenance is important as the craft and world beer craze has made consumers appreciate more about what goes into producing quality beer and the people behind top brews.”

He recommended educating staff about the stories behind beers and  stressed the importance of delivering the ‘perfect serve’.

“I always say to pub and bar owners when stocking any beer that it has to be promoted and presented properly to give yourself the best chance of sale,” said Archibald.

“Customers have taken more of an interest in what they eat and drink so I believe staff should know the story behind the beers they stock and the taste of them.”