ALLY Stewart is happy, efficient and clearly in his element behind the bar at Glasgow’s Hootenanny.

The 21 year old has worked full-time in the Howard Street pub for a year now, and speaks enthusiastically about opening his own bar one day.

Hootenanny’s owner Colin Drummond reckons Ally is “one of these people who was born to be in the trade”, saying he possesses a “strong work ethic and great personality”. 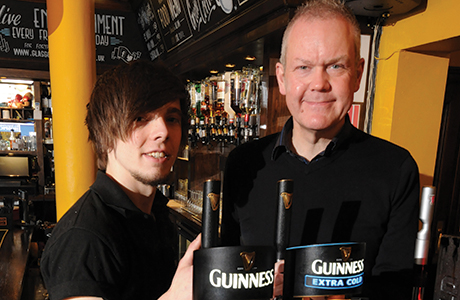 It’s a ringing endorsement from his boss; and it’s perhaps all the more significant because, until a little over a year ago, Ally had never considered a career in the licensed trade.

In fact he admits he wasn’t sure which route to take.

“I had done hairdressing for about three years and got some qualifications but I didn’t really know what I wanted to do,” Ally told SLTN.

“I had worked in a local pub in Lenzie three or four nights a week for extra money while I was hairdressing, but I never thought it could be a full time-career.”

A visit to the job centre last January, however, was to change all that.

Ally was offered a place on the new Learning for Life training programme, which had been launched by Smirnoff and Guinness owner Diageo.

The Learning for Life programme aims to equip unemployed young adults with the skills and work experience required to gain employment in the hospitality sector.

The drinks giant had chosen Scotland as the European launchpad for the £5 million initiative, which was first introduced in 2008 in the Caribbean and Latin America.

And Ally was part of the pilot scheme, joining around 12 others on the initiative’s inaugural bartending course in January 2014.

The six-week full-time course, which is delivered by Diageo’s training partner Springboard, combines practical elements, such as wine and whisky
tastings and cocktail masterclasses, with skills like presentation and interview techniques. Candidates on the inaugural programme visited Diageo HQ in London and its Glenkinchie Distillery in East Lothian, and met the secretary of state for Scotland and other MPs.

Ally said the course opened his eyes to the prospect of a career in the trade.

“I think like a lot of people I didn’t realise all the different aspects to it,” he said.

“I really enjoyed the course. I think the more I learned the more I enjoyed it.

“It also gave me confidence. A year and a half ago I wasn’t very confident with things like interviews but the course helped me a lot with that.
You need confidence in this trade.”

The training programme culminated in a two-week work placement, which saw Ally join the 12-strong staff at Hootenanny.

Colin Drummond, who has owned the pub for the past two years and also owns American diner Steak, Cattle & Roll and Kings Cafe, both in Glasgow, said he offered Ally an incentive at the end of the work experience.

“We said there was a job there for him if he could prove himself and show that even after long shifts he could still put a smile on his face,” Colin told SLTN.

“Ally really threw himself into it and worked incredibly hard, whatever the job was.

“He has a really strong work ethic and a great personality for this business.

“In this industry there are certain people who are just made for it; Ally is one of them.”

His work placement led to a full-time position and, a year later, Ally is relishing his role at Hootenanny.

“A couple of years ago I didn’t know what I wanted to do but I wouldn’t have thought about this as a career,” he said.

“Now I love it. And there are so many opportunities; it can take you anywhere.

“Eventually I want to move up and own my own bar or restaurant.”

Mark Baird, head of alcohol in society at Diageo GB, said the Learning for Life programme benefits both young people and the trade.

“As we enter into the second year of the programme we are expanding into new areas such as Oban, Aberdeen and Dumfries, and we have just started our first pilot programme in London,” he said.

“The support from the trade in Scotland has been fantastic so far and Diageo, along with its training partners Springboard, is continuing to build on those important links to ensure that the benefits of Learning for Life extend as far and
wide as we can possibly make it go.”