General manager loving life ‘at the coalface’ in capital venue

MURRAY Ward has no idea how many steps he walks in an average day at work.

But having spent the best part of a day with the general manager of The Rutland hotel in Edinburgh, it must be well into the thousands.

Murray has a desk in head office, but he admits he hasn’t sat at it for weeks. 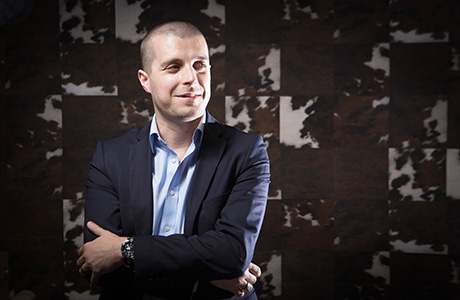 Instead he prefers to be ‘at the coalface’ in the business, which comprises bar and restaurant The Huxley, the 100-cover Kyloe Restaurant & Grill, a private dining and events space, 12 bedrooms and five serviced apartments in two townhouses further along Rutland Street.

The basement of The Rutland is home to two Edinburgh Gin stills – named Flora and Caledonia – and is where the Spencerfield Spirit Company team produces small batch gins and offers distillery tours by day; by night, the space operates as gin bar Heads & Tales.

There can’t be many GM roles that are quite so diverse; there is no typical day – and that’s just how Murray likes it.

Having ‘grown up’ around the hospitality industry (his father Thomas was a hotelier), Murray got a taste for the trade at an early age.

However, he wasn’t intent on pursuing a career in the sector back then.

Instead he went on to study art, theatre, film and TV at university in Glasgow. But a part-time job in a bar reignited his passion for the trade.

Leaving university at 19, Murray pursued a full-time career in the hospitality industry, working at a number of venues in and around Glasgow, including Bouzy Rouge, Bar Budda and Metropolitan.

A move to Edinburgh nine years ago saw Murray join Montpeliers, where he would spend the next five years working in the group’s Tigerlily, Montpeliers and Rick’s venues.

It’s experience Murray credits with driving his career forward; it’s also where he met his wife Hazel, who has an operations role with The Rutland’s parent company Signature Pub Group.

After his stint with Montpeliers, Murray moved to The Rutland in 2011.

He joined four years after Nic Wood’s Signature group had acquired the hotel from Saltire Taverns – and at a time when The Rutland was set to undergo yet more change. 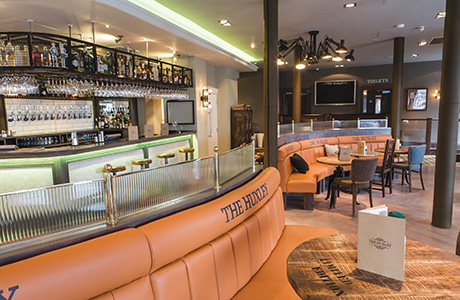 Signature had carried out a root and branch refurbishment on buying the property in 2007. But there were plans to revamp The Rutland’s restaurant and bar again, and give each its own identity.

“It had been The Rutland for so long,” said Murray.

“When Nic bought it he did a massive refurbishment and kept the name because it was so well known. The restaurant was the Rutland restaurant, the bar was the Rutland bar and the design was very much the same. It worked well.

“The aim with the next refurbishment was to create viable, stand-alone outlets that were still part of The Rutland but had their own identities.”

First up was the 100-cover restaurant, which was revamped and relaunched as steakhouse Kyloe in October 2011.

Buoyed by the success of the restaurant, attention turned to the bar, which was refurbished and relaunched as The Huxley in early 2013.

The move has paid dividends, according to Murray.

“It was a big investment and a big thing for us because The Rutland is an iconic name,” he said. “I think the confidence of changing the name and style of the restaurant and the success of that gave us the confidence to do it here [in the bar] too.

“It was probably more of a risk because the Rutland name has been on the bar for years but The Huxley is doing really well.”

The changes at The Rutland didn’t just involve revamping existing parts of the hotel.

Other elements have been added to the business.

Half of the basement space previously occupied by nightclub The One Below was transformed into a private dining room, while the remainder of the vaulted basement is occupied by Spencerfield Spirit’s Edinburgh Gin distillery and visitor centre; and late night gin bar Heads & Tales.

Other additions to the business include a 50-cover outdoor area in front of the hotel and the five serviced apartments in Rutland Street, in which guests can opt for self-catering or service from The Rutland.

It’s a diverse business, which Murray manages with a “great team” of around 95 staff.

And it’s a role clearly relished by the GM.

“I’m really proud of what we’ve done in the last two or three years in terms of individualising the different parts of The Rutland,” said Murray.

“It feels like we’ve achieved what we set out to do – to change the building and make each of the areas a stand-alone venue in its own right with its own identity. I think it’s a much more exciting proposition. It keeps my job exciting; it’s more challenging.

“I’m massively lucky to do the job I do. I love the front-end and interacting with people; but I love number crunching too.

“If I didn’t work in this business I don’t know what I’d do.”