Home is where the heart is for Rocca’s Jamie Scott. Graeme Murray reports

AFTER winning MasterChef: The Professionals, many people might have expected Jamie Scott to have his sights set on a job in an upmarket London eatery.

But the 27 year old has stayed true to his Scottish roots and believes restaurants here are constantly raising their game; he said there’s no temptation to move south of the border.

Jamie, who has been head chef at Rocca in St Andrews for three and half years, has had a lot on his plate since winning the TV competition.

But he has remained faithful to the chefs – and family members – who have influenced him since he began cooking in Arbroath, Angus.

“I started off at the Colliston Inn in Arbroath, which my parents ran,” said Jamie. “My mum showed me how to cook and taught me the basics.

“I was there for a few years and I then went on to work with Byzantium in Dundee where I was senior sous chef.”

A period at the Loggrait Inn near Pitlochry followed before he arrived at his current workplace.

Since joining Rocca, which secured three AA Rosettes in 2013-14, Jamie said the restaurant’s executive chef Davey Aspin, who has worked with Marco Pierre White and Gordon Ramsay, has been “massively influential”.

The location of Rocca, which overlooks the Old Course in St Andrews, is also said to have been inspirational, as he is constantly cooking for an international customer base with high expectations.

Jamie’s menu in the MasterChef: The Professionals TV final saw him return to his roots in Arbroath where he studied cookery at Angus College. It included a starter of pickled East Neuk crab with pickled cucumber and raw Granny Smith apple, served with an Arbroath smokie veloute and savoury doughnuts filled with flaked smokies and Tobermore cheddar with a crunchy topping of burnt Parmesan and chives. 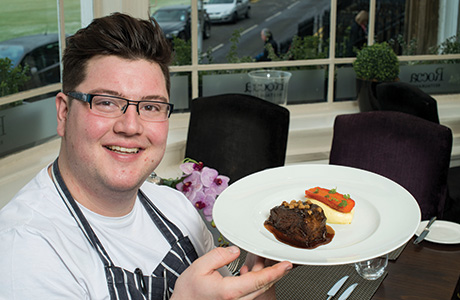 The Edinburgh-born chef admits opportunities have opened up since he appeared on the show.

His latest challenge is competing in the final of this year’s Scottish Chef of the Year competition at the ScotHot trade show in Glasgow today (March 5) where he will take on seven of his culinary peers.

Looking ahead, Jamie has further ambitions to fulfil.

He was reluctant to be drawn on any future plans, including whether opening his own restaurant figures.

But he hinted that a move to one of Scotland’s bigger cities might eventually be on the cards.

“I think restaurants here are definitely getting better and we’ve got some of the best chefs in the country just now,” he said.

“The Edinburgh scene is just amazing and the markets are also getting better.

“I love Glasgow and I love Edinburgh, but I think Glasgow is missing a big restaurant.”

For now, Jamie is hard at work in Rocca and enjoying the plaudits since his appearance on the show.

“I love all the attention we are getting at Rocca and all the comments I’ve had from people – many of whom are my heroes,” he added.

“I will move on, but I’m happy just now, we are fully-booked every night and in the summer we get customers from all over the world.”