BETWEEN them Philip and Lesley Mellor have notched up 50 years in the hospitality trade.

But after working for large hotel groups for decades they decided it was time to run their own place and bought the former Rossborough Hotel in Dunbar, East Lothian, which had been closed for 18 months. 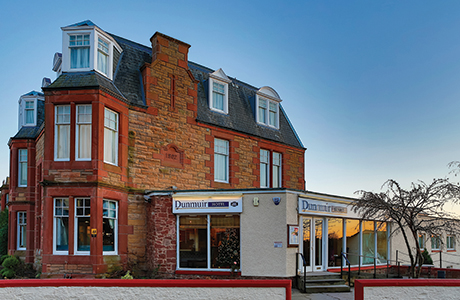 They acquired the 20-bedroom property for £250,000 and spent a further £250,000 and six months refurbishing it in stages to create what Philip described as a “boutique look which is modern contemporary”; they relaunched it last November as the Dunmuir Hotel, with the new name paying tribute to the coastal town and naturalist John Muir who was born there.

The main building work was carried out by a team from Edinburgh-based Xerus, which recruited other tradespeople to work on the project.

It involved completely gutting the hotel and replacing the central heating system as well as rewiring, plastering and decoration.

A1 Carpets and Flooring in Dunbar carried out tiling and carpeting work throughout the hotel, including grey/mauve floor coverings in the bedrooms. The rooms were furnished by Elite Contract Furniture, which provided beds, chairs and tables for the hotel’s Standard and Yosemite room types.

In the 40-cover 1902 Bar & Grill, a hessian floor covering has been used in the main bar, which gives way to wooden flooring in the dining area; the new-look is completed with purple flock-style wallpaper and turquoise seating.

The 150-cover function room was also revamped as part of the project.

The Goldenstones Suite, which has retained its name from the hotel’s days as The Goldenstones (before it was the Rossborough), is furnished in gold with luxurious red seating; it has its own bar and can be used for weddings and other functions. 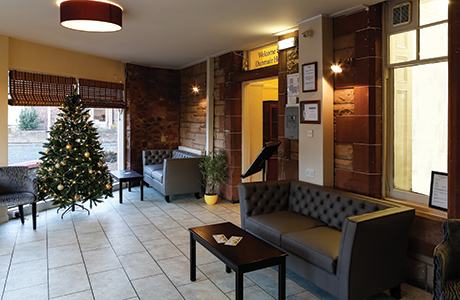 In fact, the first function in the newly-refurbished suite was a wedding.

Philip, who previously worked for Menzies Hotels and managed several hotels in the group before taking a regional manager role, said the new-look Dunmuir has been well-received by customers – both locals and those from further afield.

“Many people remembered the hotel as The Goldenstones so we wanted to reflect that,” he said.

“The hotel has a big affection in the town and I think local people were just delighted someone had taken the time to restore it.

“We opened in baby steps and carried out the refurbishment gradually. But we had the chance to help a couple out who quickly needed a wedding function room so we stepped up to the plate.

“The builders and all the trades did a great job and the couple had an absolutely fantastic wedding.”