CIDER maker H Weston & Sons has made a crafty move in the premium cider market with the launch of its new Caple Rd cider.

The new cider has been released in a 330ml can, following what the firm describes as the increasing popularity of the canned format among craft beer producers. 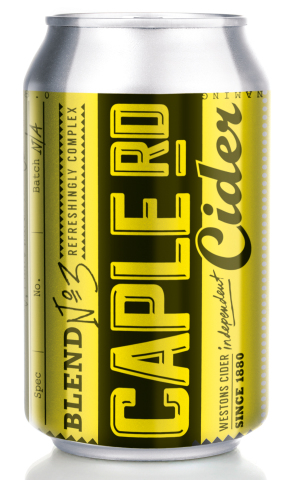 The 5.2% ABV sparkling cider is said to be produced in small batches made from fresh English apple juice and matured for up to 18 months in oak.

Caple Rd cider maker Guy Lawrence, a fifth generation member of the Weston cider making family, said the new cider has been designed “to challenge cider-makers’ palates” with its dark straw colour, notes of leather on the nose and oaky taste.

“Its slow fermentation and up to 18 months’ maturation produces a highly complex, full-bodied cider,” said Lawrence.

Geoff Bradman, head of sales at Westons, highlighted “huge growth” in the canned craft beer category in  recent years and claimed this has yet to be replicated in the cider market.

“So far no one has launched a craft cider in a can,” said Bradman.

“Early feedback from our research on Caple Rd has been absolutely phenomenal from both the trade and consumers, so we are delighted to be launching it this month and bringing some genuine innovation to the market.”