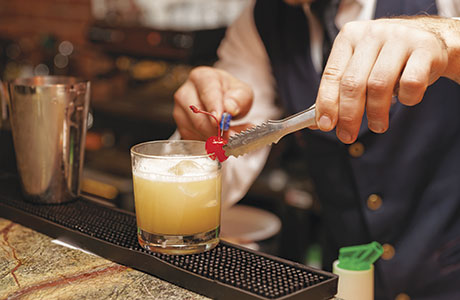 A HIGH profile year for Scotland has helped raise the profile of the country’s national drink.
And drinks firms say whisky may now be attracting more young and female drinkers in Scotland’s pubs and bars.
Stephen Rankin, UK sales director at Gordon & MacPhail, said Scotland’s place in the spotlight this year has helped to drive footfall and draw attention to Scottish produce.
“Scotland was in the spotlight in 2014, attracting many visitors to the area and in turn driving footfall in the on-trade,” he said.
“With a focus on Scotland the profile of Scotch whisky in the on-trade has been in the forefront.”
Chris Leggat, commercial director at Douglas Laing & Co, agreed that the events of 2014 helped “raise our national pride in our favourite drink”.
And he claimed that those being turned on to Scotch aren’t necessarily traditional whisky drinkers.
“It’s a competitive arena but whisky is holding its own and performing well,” said Leggat. “The interest in Scotch whisky amongst younger consumers is undoubtedly contributing to this.”
Phil Keene of Whyte & Mackay agreed that whisky has grown in popularity among younger drinkers, although he maintained that there is still an age divide between single malts and blends.
“We can see that growing numbers of consumers under the age of 35 are drinking single malts, which is indicated by the strong growth rates for that category,” said Keene.
“However, when you look at blended whiskies it is an older consumer of around 45 years old.”
It’s not just the age of whisky drinkers that has shifted in recent years.
Sarah Harding, senior brand manager at William Grant & Sons UK, highlighted a shift towards greater balance in gender when it comes to whisky sales.
“In recent years there has been a significant shift in the whisky drinker demographic, as more women and a younger adult audience have started to enjoy and experiment with whisky,” said Harding.
These new whisky drinkers are not necessarily drinking their whiskies in the traditional ways.
Jim Grierson, on-trade sales director at Maxxium UK, said there is “a growing number of female whisky drinkers emerging,” and highlighted cocktail serves as one way publicans can introduce more customers to the whisky category.
“We do recognise that women enjoy consuming whisky in different ways – and are open to experimenting with different cocktail serves,” said Grierson.
“Cocktails offer customers who are new to whisky a good introduction to the category, and will appeal to customers looking for a different way to enjoy their favourite dram.”
The firm’s marketing controller for imported whisk(e)y, Janice McIntosh, also highlighted the impact of the “continuing popularity” of cocktails, “particularly with the return of prohibition cocktails and speakeasy-style bars”.
McIntosh said it is important to “communicate signature serves” to customers and that whisky should be served “at its best”.
“Ensure they [whiskies] are served in the correct glass and with the appropriate garnish,” she said.
The importance of presentation was also highlighted by David McGowan, head of trade relations for Scotland at Diageo, who said visual appeal is crucial to growing whisky sales.
McGowan highlighted the importance of having a broad range of whiskies that customers can see on display.
“To drive whisky sales, licensees should always give whisky brands prominent space on their back-bar, and include a variety of premium and non-premium offerings, ensuring consumers can easily see what is on offer and be given the opportunity to trade-up,” said McGowan.
He added that publicans should stock a “variety of whiskies”, a sentiment that was echoed by Ian Peart of Pernod Ricard, who added that this doesn’t have to mean “radical changes” to an outlet’s whisky range.
“It is about knowing who your consumers are and how they are drinking, as well as understanding categories that are enjoying strong growth,” said Peart.
McGowan and Peart agreed that publicans should build a whisky range covering multiple price points, creating the opportunity to cash in through up-selling.
Ranging in this way can also have a positive effect on an outlet’s reputation for quality, according to Peart.
“As with all spirits, having a premium upsell to most major categories will allow you to enhance the consumer experience in your outlet, improve the reputation of your outlet and reinforce quality cues to the consumer,” he said.
Knowledge of the products on the back-bar is fundamental to increasing sales and attracting new customers, according to Frazer McGlinchey, brand advisor for Balblair at Inver House Distillers.
“What is key when introducing whisky to new drinkers is education around the brand and liquid,” he said. “Explaining the provenance and the story of the whisky is particularly important, especially now with consumers becoming ever more discerning.”