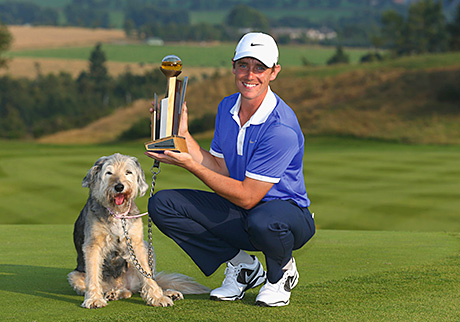 Englishman Fleetwood, pictured above with his dog Maisy, took the trophy and €272,272 prize money after beating Scot Stephen Gallacher and Argentina’s Ricardo Gonzalez on the PGA Centenary Course, which will stage the 2014 Ryder Cup.
Fleetwood said winning the championship, which was hosted and sponsored by Diageo, was “unbelievable”.
“I’ve been out here on tour a while and I haven’t even had a top five the last two years,” he said.
“And then all of a sudden you come out with a win.
“To win is just absolutely amazing.
“You look at all the winners on tour, and I’ll admit, I’m so jealous when somebody wins, but finally it’s my turn.”