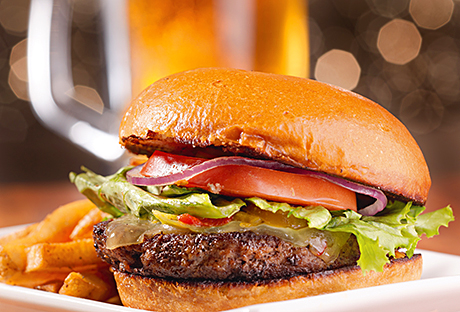 UPMARKET or gourmet ‘junk’ food has emerged as a growing trend in UK pubs, according to a new report by research firm Mintel.

Recent figures from the firm claim that one in ten UK diners has tried what Mintel classifies as ‘gourmet junk food’ with a further 46% who haven’t saying they would be interested to try upmarket twists on junk food staples such as gourmet burgers and hotdogs with quality ingredients.
Helena Spicer, food service analyst at Mintel, said that menu innovation is “rife in an increasingly competitive and mature marketplace,” highlighting trends such as “gourmet junk food and artisan pastries” as popular menu options for attracting new customers.
Overall, Mintel claims £6.5 billion was spent on ‘pub grub’ in the course of 2012, with pubs continuing to account for the largest share of the eating out market, followed by ethnic restaurants such as Indian and Chinese.
Pub and bar restaurants are also ahead in terms of footfall, with 57% of UK diners eating in pubs in the course of 2012.
In total, Mintel reported that UK consumers spent £31bn on eating out in 2012, with the firm predicting growth to £32bn in 2013.
Despite this growth, however, the research found that consumers continue to remain cautious with spending.
In fact, Mintel claims that as many as a third of British consumers have reduced the number of times they have eaten out in the last year, with 24% claiming to have reduced their spending when dining out.
Pricing was found to be the most important factor in a consumer’s restaurant selection, with 54% of respondents citing price range as their top concern when selecting an outlet for an ‘everyday’ meal.

Image – Gourmet ‘junk food’ is said to be a growing trend amongst consumers.