Licensing overhaul will have positive impact on security industry

THE introduction of a new regulatory regime for private security companies should help raise standards and cut the number of “corrupt” firms in the industry, according to the former head of the Security Industry Authority (SIA).

Speaking at a recent event in Glasgow, baroness Ruth Henig, formerly chair of the SIA and now a non-executive director at Glasgow-based SecuriGroup, said professional operators will have “nothing to lose and everything to gain” from a new regime and licensing system.
The SIA, which regulates the private security industry across the UK, is due to be overhauled as part of a UK government focus on deregulation.
The government has already said it wants the new regulator to shift its focus from individuals to businesses, although individuals will continue to require licences. 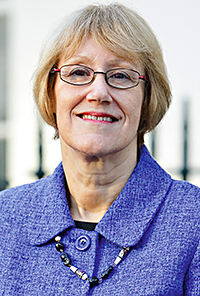 It has been proposed that under the new regime the SIA will publish an online register of licensed security businesses.
A consultation on the new set-up closed in January this year, with the Home Office receiving more than 800 responses.
Speaking at the headquarters of SecuriGroup, Henig said that licensing businesses as well as individuals should make it “much easier to crack down on those businesses which are operating under the radar for whatever reason, or that we suspect are corrupt but can’t actually prove it”.
“I understand that a number of bodies are already planning how they are going to work under the new regime, including a very useful liaison between the Scottish police and the SIA, and that will make it much easier to bear down on those companies that, quite frankly, should not be operating at all.
“I’m not naming any names, but we all know that there is that side of the industry, and there are firms that do a lot of harm in the private security sector.
“Anything that will drive those companies out I think has to be welcomed.”
Henig also said she hopes the SIA will be given more punitive powers under the new system.
“I very much hope it won’t just be regulation of businesses, but that it will also include sanctions and penalties for those who try to evade regulation or undercut more ethical companies,” she said.
“To have regulation of companies without appropriate sanctions or penalties would not be very effective.”
The Home Office is expected to unveil details of the new regulatory system later this year and introduce it in 2014. An SIA licence has been mandatory for anyone working in the private security industry, including door staff, since 2007.