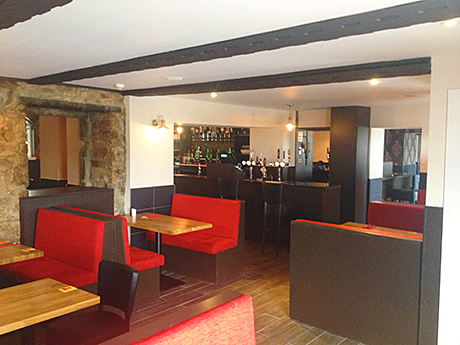 RONALD Akass and his family already had a history with The Clifton Bar when he and business partner Mohammad Ali took the reins earlier this year.

As well as being a long-time customer of the bar, he is the second generation of his family to look at the site – his mother having once considered taking over the Lossiemouth outlet fifty years ago.
And he had big plans for the outlet.
He and Mohammad took over the business in May of this year, after it had been closed for several weeks, and embarked on a comprehensive refurbishment.
“It was taken right back to the bare brickwork,” Ronald told SLTN.
“The whole thing was absolutely demolished. It was completely rewired, completely re-plumbed, plaster-boarded throughout. The ceiling has been lowered, new modern lighting put in, new modern décor. It’s a complete top to bottom [refurb].”
Using local companies where possible, the project included the installation of new benches and bar stools, tiled walls and flooring and a new marble bar top.
Tennent Caledonian worked with the operators to overhaul the beer cellar, and now provides the bar’s draught range, which includes Tennent’s lager, Caledonia Best and Stella Artois.
Historically a wet-led business, the project also saw the creation of a distinct restaurant area, which the owners hope will help broaden the appeal of the premises.
Operating between 10am and 8pm (after which the space becomes part of the main bar), the restaurant provides a menu of “traditional, home-cooked Scottish food”, using produce from local suppliers.
“We wanted to widen the customer base that we had,” said Ronald.
“Bringing in a restaurant, which it [the pub] never had, bringing in families, which we’re keen to do.”
Social events such as darts competitions, quiz and poker nights are another way in which Ronald and Mohammad intend to attract a broader clientele to the bar.
“We want to welcome the regulars back but also new regulars who will feel comfortable in the surroundings – young couples and older people that want to come out for a couple of pints, a bite to eat and a chat,” Ronald added.
In total, around £100,000 was spent on the revamp of the outlet, creating a space the operators described as “very modern, very contemporary, comfortable, elegant and sophisticated”.
But work at The Clifton Bar isn’t over just yet.
The next stage will involve doubling the number of letting rooms from five to ten by utilising former owner’s accommodation and adding en suite facilities and refurbishing every room. The work is expected to be finished by Christmas this year.