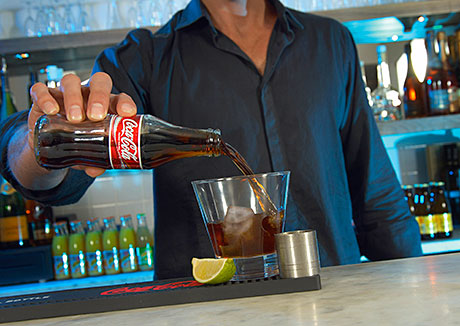 CASUAL dining represents one of the biggest opportunities for growing soft drinks sales in the on-trade, according to suppliers.

Soft drinks firms contacted by SLTN said the growing trend for informal dining and other short social occasions represents a significant opportunity for bar and pub operators.
Andrew Boyd, commercial director for leisure at Britvic, said trips to bars for meals are now seen as a “bridge between fine dining and lower cost fast food”.
He reckons consumers visiting the on-trade for dining occasions “have the propensity to order soft drinks”, providing a sales opportunity for publicans.
Graham Carr-Smith, founder of flavoured soft drink brand Qcumber, agreed that the food occasion presents licensees with an opportunity to maximise sales of soft drinks.

People are looking for something that complements their meal rather than competing with it.

“With more and more people viewing pubs and other licensed premises as somewhere to eat rather than just to drink, the importance of soft drinks to accompany meals is growing,” he said.
Carr-Smith advised operators to consider the style of food served when choosing their soft drinks range.
“Many people prefer to avoid highly carbonated products when eating, and are looking for something which actually complements their meal rather than competes with their taste buds for attention,” he said.
Dining isn’t the only occasion that presents an opportunity to grow soft drinks sales, however.
Boyd said shorter social occasions, such as friends meeting for a post-work catch-up, represent another chance for licensees to boost soft drink sales. “As lifestyles have become busier, consumers have less time to socialise, which has led to an increase in on-the-go catch-ups with friends over coffee or one drink on the way home from work, which is often a soft drink,” he said.
Presentation is crucial to maintaining consistent soft drinks sales, according to Wes McKenna of Coca-Cola Enterprises.
“Making drinks highly visible is important,” he said. “They should feature on food menus to drive awareness of an outlet’s range. We still find that soft drinks are often under-represented on outlets’ menus and we are working with customers to help them understand the benefits of this.”
Amanda Grabham, head of marketing for Shloer, agreed that highlighting soft drinks alongside food can impact on sales.
“Remove flavour duplication to free up space to offer a broader range of brands to appeal to different age groups and consumption/social occasions,” she said.
“Including soft drinks on food menus is the first priority, use point-of-sale on tables and at the bar, and increase visibility in the chiller.”
Growing consumer interest in eating and drinking more healthily is also impacting on soft drinks choices, said Heather Beattie, product manager for catering supplier Nisbets.
Beattie suggested licensees, and food-led businesses in particular, “seriously consider” offering alternatives to carbonated drinks.
“Customers are much more aware of issues surrounding health, such as sugar and other additives, and so are expecting drinks solutions that take this into account,” she said.
The broad range of soft drinks available to operators offers the chance to tailor a drinks list to suit different times of day, according to Tom Smith of energy drinks firm Red Bull.

Including soft drinks on food menus is the first priority.

He stressed that early evening, in particular, can be a key time for soft drinks sales.
“Make sure you’re communicating the right products and up-weighting consumer purchase earlier in the evening to long mixed drinks that are going to increase their bar spend and dwell time,” he said.
Adrian Troy, head of marketing for AG Barr, which distributes energy drink Rockstar, suggested that publicans with a younger clientele should include energy drinks in their range.
“Energy drink consumption is greater in the 16-24 years of age group,” he said. “Brand image is a really important factor for these consumers.”

Image – Delivering the ‘perfect serve’ on soft drinks is key to growing sales, according to CCE.