Chef makes his name in the capital 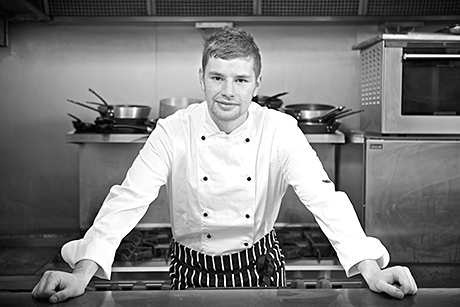 SURVIVING that first tough year in business can be counted as an achievement in itself, but when you consider that the business owner is just 22 years old, the story is just that little bit more impressive.

Not that Michael Neave was a rookie when he opened signature restaurant Michael Neave Kitchen and Whisky Bar in Edinburgh last year.
Despite his tender years Michael had already clocked up a wealth of experience working for his chef father, David, as well as a stint in the kitchen of Edinburgh hotel The Bonham. Latterly, he was working under David in the restaurant at the Scotch Whisky Experience, Amber, where his father and sister still work.
“It makes a difference when you’ve got the understanding of how a kitchen works,” Michael told SLTN.
“I see now a lot of guys my age who have gone through college, come into the kitchen and they’re not prepared for the environment a kitchen is. It’s very high stress.”
The restaurant, on Fishmarket Close just off the Royal Mile, was a shell when Michael took the lease last year – and the young chef was given free rein to refurbish it.
Costs were kept in line wherever possible during the project. The original oven (since replaced) came from a hotel that had closed down and was purchased for £400 and restored by Michael himself, while tables in the restaurant were built by a friend.
On a limited budget, using his own savings and with a little help from his parents, Michael was able to kit out the restaurant ahead of its launch on June 13 last year.
It was a low-profile opening, catering for ten or eleven covers a night for the first few weeks, with Michael asking customers for feedback along the way.
A year on, and the restaurant continues to evolve – an outside area was being developed earlier this month, which Michael hopes to establish as a “secret garden” in Edinburgh’s Old Town.
The food offer continues to evolve as well. Described as “nice, flavoursome” Scottish food, the menu is built around quality ingredients, said Michael.
And he is determined to let the produce take centre stage at the restaurant.
“My first focus is on sourcing the right products, which makes my job so much easier,” he said.
“Chefs are just the final stage. I believe we have a responsibility to finalise the hard work that these guys have done – chefs think they’ve got it bad but you should see the work done by the fishermen and the farmers.
“So we have a responsibility to look after that product and do it justice.”
The ambition for Michael Neave Kitchen and Whisky Bar is to continue to build the customer base and establish a reputation as a “hidden gem”, said Michael.
But the young chef’s ambitions don’t end there.
“I always wanted to have my own business, and this is just the start of my ambition,” he said. “I want to have a number of different things.
“The ultimate would be a small country hotel. That’s what I’d ultimately like to have.”