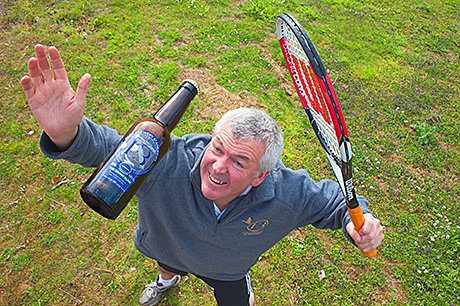 PUBLICANS were served a boost to trade last weekend as Scotland watched Andy Murray battle to victory in the Wimbledon final.

Murray beat Serbian Novak Djokovic in straight sets at SW19, becoming the first Brit to win the men’s title in 77 years.
And the nail-biting tie – coupled with a heatwave – meant customers were flocking to pubs.
In Murray’s hometown of Dunblane, Helen McClymont of the Tappit Hen said the pub was busy all day last Sunday (July 7).
“It was phenomenal, we were full from early morning until closing,” she told SLTN. “We were busy for the semi-final too but Sunday was the most special day here.”
At Cheers in Fraserburgh, the good weather meant the venue’s 300-capacity beer garden, which has outdoor screens, was full for the final. Cocktails and strawberries and cream were the best-sellers, according to owner Dennis Forsyth, who said trade was two or three times more than an average Sunday.
And he expects the positive feelings around the final to continue to lift trade. “I think for anything as big as this the euphoria will carry through for some time,” he told SLTN.
And it wasn’t just pubs that made the most of the Wimbledon final.
Father and daughter team Paul and Vicky Miller, of Eden Brewery in St Andrews, launched a limited edition 4% ABV Grand Slam beer.
Just 1977 bottles of the beer were released as 1977 was the year Virginia Wade won the last British singles title at Wimbledon. The beer, which sold out on match day, was available in pubs in Edinburgh and Glasgow as well as off-trade outlets in Dundee and Bridge of Allan.
“I kept a few bottles back so that we could celebrate Andy’s win, and they went down a treat,” said Paul.