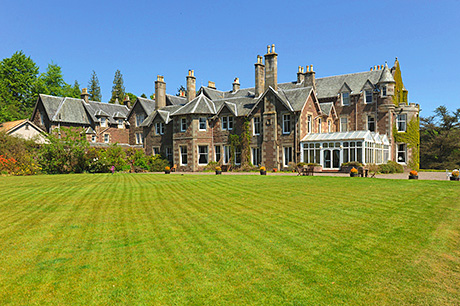 THE company tasked with transforming a Scottish country house hotel on behalf of tennis ace Andy Murray said it expects refurbishment plans to go ahead as scheduled, despite concerns raised by Historic Scotland.

Murray purchased Cromlix House, near Dunblane, earlier this year with plans to convert the property into a 15-bedroom five-star hotel. Management firm Inverlochy Castle Management International (ICMI) was appointed to run the hotel and oversee the refurbishment project along with property firm Bidwells.
ICMI is aiming for a spring 2014 opening for the hotel, which is already fully booked for the week of the Ryder Cup at Gleneagles (September 23 to 28) and a number of planning applications have been lodged with Stirling Council regarding alterations to the interior and exterior of the property.
However, the council has referred one of the applications, regarding plans to relocate a 400 year old stone sundial and gate post, to Historic Scotland, which has raised concerns about a lack of detail in the application.
But ICMI managing director Norbert Lieder said the company expects to be able to proceed with the project.
“Cromlix has been unoccupied for over a year and the building and grounds are in need of investment,” he said.
“The refurbishment plans proposed by the Murray family aim to preserve the historical structure of the hotel while creating an exclusive five-star 15-room hotel that brings significant benefit to the local community.
“Our planning application includes a proposal to re-configure the entrance and parking to allow for anticipated additional customer demand.
“As part of this we propose moving the listed sundial and gate piers elsewhere on the property, where they can continue to be enjoyed by customers and the community. Our plans have not received any formal objections and we hope to work closely with both Historic Scotland and the Royal Commission on the Ancient and Historical Monuments of Scotland (RCAHMS) to ensure we satisfy their requirements.”
A spokeswoman for Historic Scotland said the organisation is “very supportive” of any plans that would provide a “long term sustainable use” for the property.
“However, we advised that the application lacked detail and that care was necessary when the historic structures were being moved. It now rests with the council to take a view on the application,” she said.
A decision from Stirling Council is expected this month.
ICMI has commissioned Edinburgh interior design consultancy Ian Smith Design to revamp the hotel’s drawing room, bar and restaurant.
Ian Smith, who will lead the design team, said: “It is a great pleasure to have received this commission and that our skills have been recognised to design what is going to be another great restaurant.
“The design is well underway and is being well received by all parties. It will be based on the principle I always work on in restaurant design, namely the design must compliment the food, not detract from it.”
Chef Albert Roux will oversee the restaurant design and implementation, which will open as a Chez Roux branded venue.

Image – Andy Murray bought Cromlix House earlier this year. He intends to convert it to a five-star hotel.