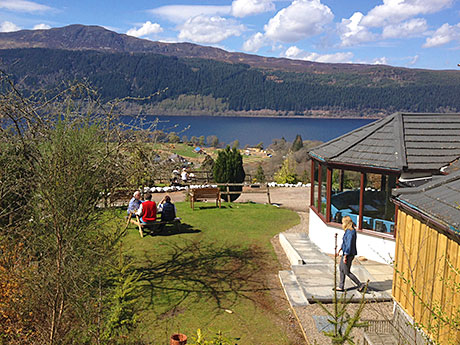 THE owners of an Inverness-shire hotel have launched a new public bar – said to be the first in the village for 20 years.

Elinor and Martin Donnelly opened Am Fuaran (Gaelic for spring, well or watering hole) at Craigdarroch House Hotel in Foyers, which they have owned for the past six years, earlier this month.
The new bar was created in an existing space, which was extended by Simpson Builders of Beauly, with a local joiner working on the interior fixtures and Laidlaw Contracts supplying the furnishings.
Overlooking Loch Ness, the bar features a combination of fixed and loose seating, dark wood tables and a new bar counter; there’s also a beer garden with views of the loch.
Am Fuaran is open daily from 11am to 11pm, with food served between 12noon and 2pm and from 6pm to 8.30pm; a children’s menu is also available.
Elinor told SLTN the new bar, which took around four weeks to complete and cost £50,000, has been on the cards for some time.
“We have a restaurant and a whisky lounge with about 120 malts but we were keen to have a larger public bar with a separate entrance,” she said.
“There’s not been a pub in Foyers for about 20 years; there are six hamlets in this area and a few hundred people who live here – and I think people are really enjoying having a pub on their doorstep.
“There’s no village hall so we’re hoping people will use it as somewhere to meet, for local groups. We’re also doing lunch and dinner and a Sunday roast, which is going really well.”
The new public bar isn’t the only change at Craigdarroch House Hotel.
Earlier this year, Martin and Elinor invested £70,000 in a woodchip biomass boiler to heat the eight-bedroom hotel and its water supply. Elinor said they are already seeing benefits from the new system.
“There’s no mains gas here so we were using LPG and the price of it was going up every quarter,” she said.
“We’ve got a couple of log fires in the hotel and they heat those rooms and are a lovely feature but they don’t provide the level of heat required.
“We had to find another way to heat the hotel and water and biomass was the way to go.
“It is a huge long-term investment but we’ve seen a big difference so far. The heat is fantastic.”
With the new boiler installed and public bar opened ahead of the main tourist season, the Donnellys are looking forward to a busy summer.
“I think the draw of Loch Ness is international and there are a lot of foreign visitors, especially in July and August,” added Elinor.
“Now with the public bar we’ve got more of a draw for the locals so that will hopefully bring more year-round trade.
“And there’s a lot of self-catering accommodation in the area, and a 100-pitch caravan park being built, so it’s a pub for people staying there too.
“We’re confident it will appeal to visitors and locals alike.” 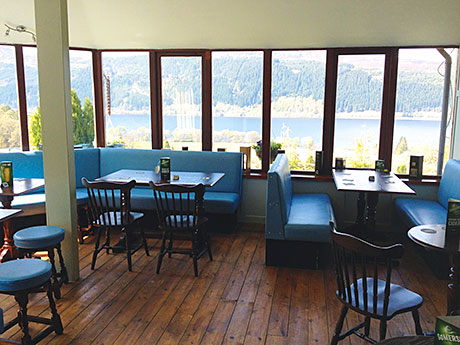