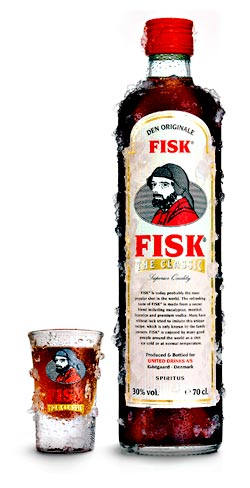 THE owner of Danish speciality spirit Fisk has identified Scotland as a key market as it launches its assault on the UK’s pubs and clubs.

Currently on trial in ten bars north of the border, including 56 North and The Captain’s Bar in Edinburgh and Club Red in Greenock, as well as premises in England and Wales, Fisk was launched in Denmark in 1999. It is now established throughout Scandinavia, Germany, France, Spain, Australia, Thailand, the Baltic countries and Spain.
Fisk – a blend of premium vodka, menthol and eucalyptus – is designed to be drunk as a shot, as a ‘bomb’ with an energy drink, or mixed with cola (an ‘F&C’).
Pitched at 18 to 40 year olds, with a particular focus on the student market, Fisk is being distributed in the UK by KC Brands, which is backing the launch with branded shot glasses, trays and pourers, as well as a limited number of Fisk ice shot machines, which dispense Fisk at its optimal ice-cold temperature and are loaned to bars for a limited time.

Competing with Jagermeister is not a problem. The more they sell the more we sell.

Despite some obvious similarities with German herbal liqueur Jagermeister when it comes to style of serve, Fisk owner Thomas Anthon told SLTN the speciality spirits each have distinct tastes, adding that he expects Fisk and Jagermeister to sit well alongside each other rather than being in direct competition.
“In Denmark and in Sweden we are competing with Jagermeister, and we are very good friends with them,” he said. 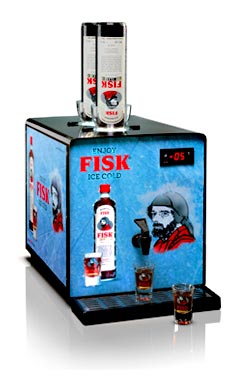 “It’s not a problem because the more they sell the more we sell.
“We are from the same cake. You drink a shot and you either choose a Jager or a Fisk.
“But we’re a little bit behind because they’ve been in the market longer than we have.
“We consider Scotland as a very good place for starting, because you are open-minded. You try new drinks.”
Anthon told SLTN an advertising campaign for Fisk, which is available from Bellevue cash and carry, will follow next year once the brand has a foothold in the Scottish market.