The extension of the partnership comes after the 1200 outlets in Scotland which took part in the first 12 months of the scheme are said to have enjoyed a significant boost in spirit and mixer drink sales.
The initiative, which launched in April last year, sees CCE and Diageo deliver training to bar staff on the ‘perfect presentation’ of mixed drinks, with a focus on popular serves like Gordon’s gin and Schweppes tonic, and Coca-Cola and Smirnoff vodka.
Operators are also given the tools to highlight perfect serves in outlets, including posters and point-of-sale materials, and new glassware. 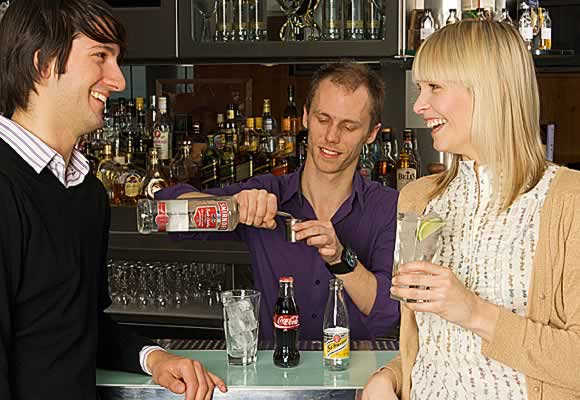 Diageo and CCE are aiming to reach 13,000 more outlets with this year’s campaign.

Last year’s activity was backed by a range of consumer-facing marketing activity, which will return in the shape of radio, outdoor and print ads to coincide with the Easter bank holiday and the ‘start of summer’.
Specific ads have also been designed for the Royal Wedding on April 29, which is being touted by drinks firms as a major sales opportunity for the on-trade. CCE regional director Alan Halliday told SLTN the partners are aiming to take the message to at least 30% – or 13,000 – more outlets across the UK this year, under the ‘together for a better summer’ banner.
“What we can say is that category growth from spirit and mixers is 9%, so we know that it has had an impact,” he said. “The other thing to say is that we know from research that, if we serve better quality drinks, 37% more people will order [spirit and mixer drinks]. So we know there is a direct impact from the actions we are taking. Clearly, if we’re doing it in more outlets now – and the licensees we have approached have been very positive – we’re bound to get a spin-off in the long-term. The real key is creating consistent behaviour in outlets, in terms of serving quality drinks and the experience that the consumer is looking for.”
David McGowan, national commercial development manger for Diageo GB, said this year’s activity would continue to focus on popular drinks, stating that “there’s still a huge opportunity on both sides in getting the serve right for spirit and mixers”. He also told SLTN the investment by the two firms in the activity, claimed to be worth £2.5m this year, was bringing a boost to operators in difficult times.
“I think it’s very encouraging that, in the current climate, both Diageo and CCE are taking a leadership stance on what we perceive as being a big opportunity for the market,” he said. “Initiatives like this can only help the market in tough trading conditions, by focusing on better quality products, which will create a higher propensity to purchase and get more purchase from what is a highly profitable category for the licensee as well.”
Halliday and McGowan said the immediate focus of the extended partnership would be on making the most of the opportunity offered by the Royal Wedding and the start of summer – a key period for both firms. The ads due to appear in the coming weeks will highlight key serves, including Pimm’s and Schweppes lemonade, and attempt to “reinforce” the link between mixed drinks and occasions like bank holidays and major sporting events.