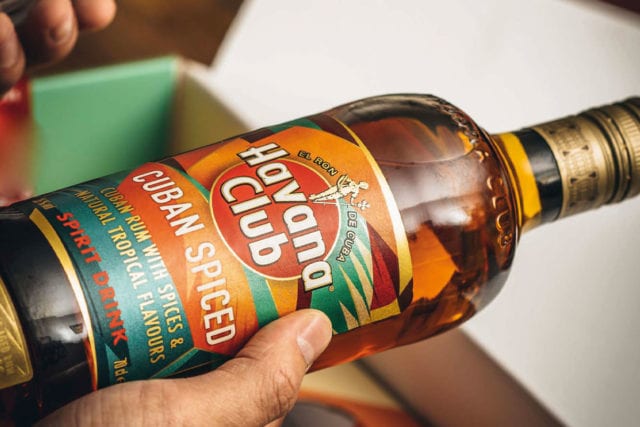 PERNOD Ricard has expanded its Havana Club range in the UK with the introduction of Havana Club Cuban Spiced.

Produced by blending Cuban rum with spices and flavours including guava, coconut and pineapple, the new spiced rum is promoted as a base for cocktails and long drinks.

The company said it hopes the new product will also attract millennial and ‘Gen Z’ drinkers into the rum category.

It has supported the launch with on-trade activity which has included bar takeovers in selected outlets – including in Glasgow and Edinburgh – as well as consumer-facing social media activity.

Quoting figures from AC Nielsen, Pernod Ricard said it expects the spiced rum category in the on-trade to follow the category’s performance in the off-trade, where it has grown significantly in the past year.

“The launch is well-positioned to capitalise on the growth opportunity in spiced rum, and we will be focusing on educating and inspiring UK bartenders on the liquid’s versatility to establish menu visibility across the on-trade.”

Scottish bartenders got an exclusive taste of the new spirit in March when Pernod Ricard hosted a virtual tasting as part of SLTN’s Trade Tastings series.

The session, hosted by Havana Club brand ambassador Liam Holyoak-Rackal, took attendees through the production and flavours of the new spirit as well as the company’s flagship Havana Club 7 rum.

“We wanted to make sure that the base of our spiced rum was aged rum,” said Holyoak-Rackal during the session. “We take such pride in our ageing process at Havana Club that it needed to be that rum first and then we start to play around with spices and exotic flavours.

“It’s got that heart of Havana Club 7 singing through it. A similar base we use for Havana Club 7, we use for this spiced rum. Then we’ll start to play around with beautiful, exotic, tropical flavours.

“The ageing brings mouthfeel, it brings complexity, it brings body to our spiced rum.”