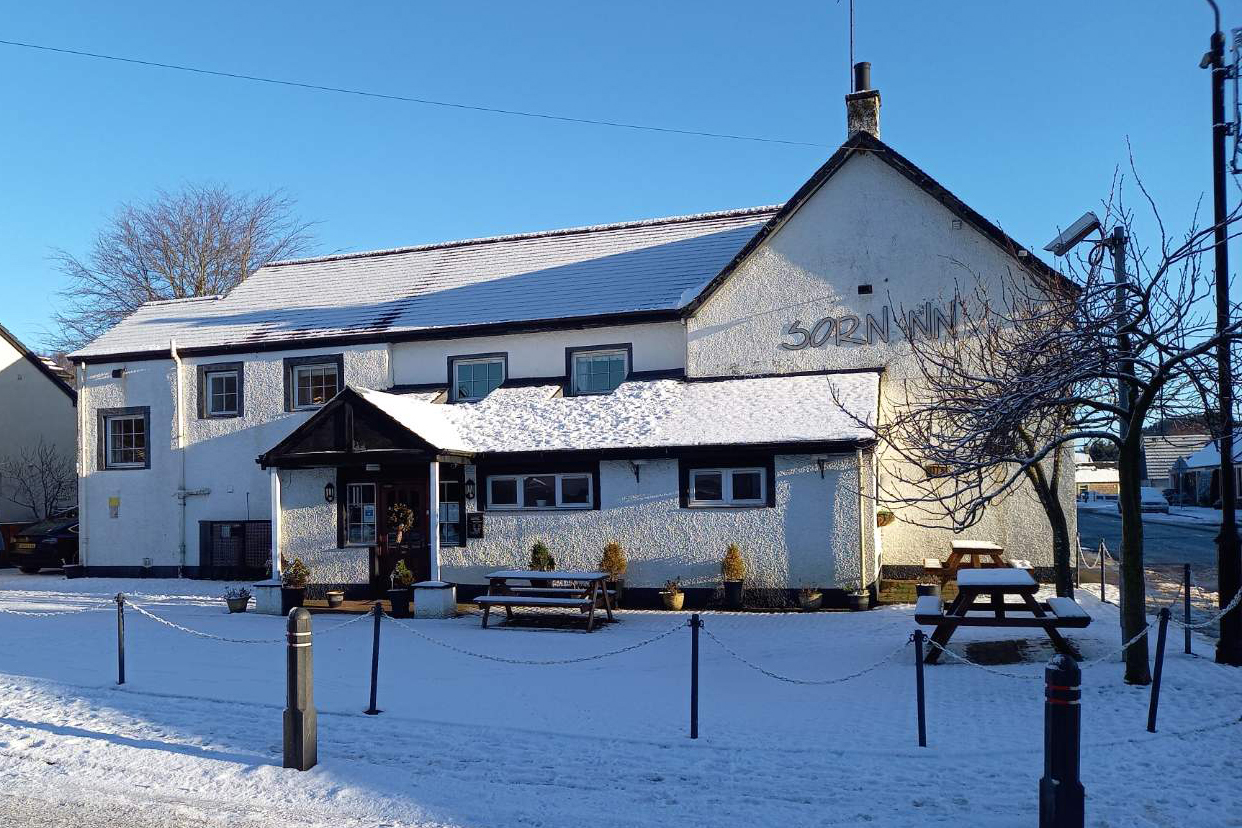 WHEN David and Karen Miller went to view a house in Ayrshire last year, their intention was to fulfil a long-held ambition of moving to the coast.

But fate was to add a twist to their plans.

Driving through the Ayrshire countryside, lawyer Karen and David, whose background is in architecture, passed by the Sorn Inn en route, with both commenting on the pretty village pub.

Their bid for the house was unsuccessful.

But David then received a property email circular showing that the Sorn Inn was for sale.

And, on 26th November, the Millers became the proud owners of the rural inn.

David concedes it perhaps wasn’t the most conventional route into the trade for the couple – not least because it came in the midst of the COVID-19 pandemic.

“It was strange how it all happened but it was obviously meant to be,” he told SLTN.

“We drove past the Sorn Inn and said how lovely it looked.

“Then I got an email from Bruce & Co which had the Sorn Inn for sale in it. We had missed out on the house so it was like a sign.

“We had talked about doing something like this before but we had always wanted to move to the coast. That was the plan and then this came up.

“Karen’s the thinker, whereas I’m the opposite – I just go for it. Karen mulled it over for a week or so. Then we put an offer in and that was it.”

After getting the keys on 26th November (when mainland Scotland was under level four restrictions meaning hospitality venues were closed), the pair got to work putting their own stamp on the place, refurbishing the 64-cover restaurant, fitting out the kitchen and opening up the bar area.

A new gastropub menu majoring in local Ayrshire produce was devised by head chef Billy Fowler and the team.

And, on 12th December (when most of mainland Scotland moved into level three restrictions), David and Karen, together with the Sorn Inn’s ten-strong team, opened the doors.

“It was brilliant,” said David.

“We obviously opened under restrictions but we were full; it was great.

“We decided to close on 19th December and lockdown came after that.”

And the Millers have sought to put the closure time to good use.

They are refurbishing the two adjoining apartments (the inn also has four letting rooms); and making plans to revamp the outdoor area.

They also introduced the Sorn Inn at Home takeaway offer, with a Taste of America menu for Superbowl weekend earlier this month, followed by a special Valentine’s menu last weekend, with 300 covers sold out.

And they are looking ahead to reopening.

“It will be great to get open again,” said David.

“I think everyone thought we were nuts. We’ve no experience – I’ve never poured a pint in my life ­- and we bought a pub in the middle of a pandemic, but it’s the right thing for us.

“I loved it and can’t wait to get going again.”