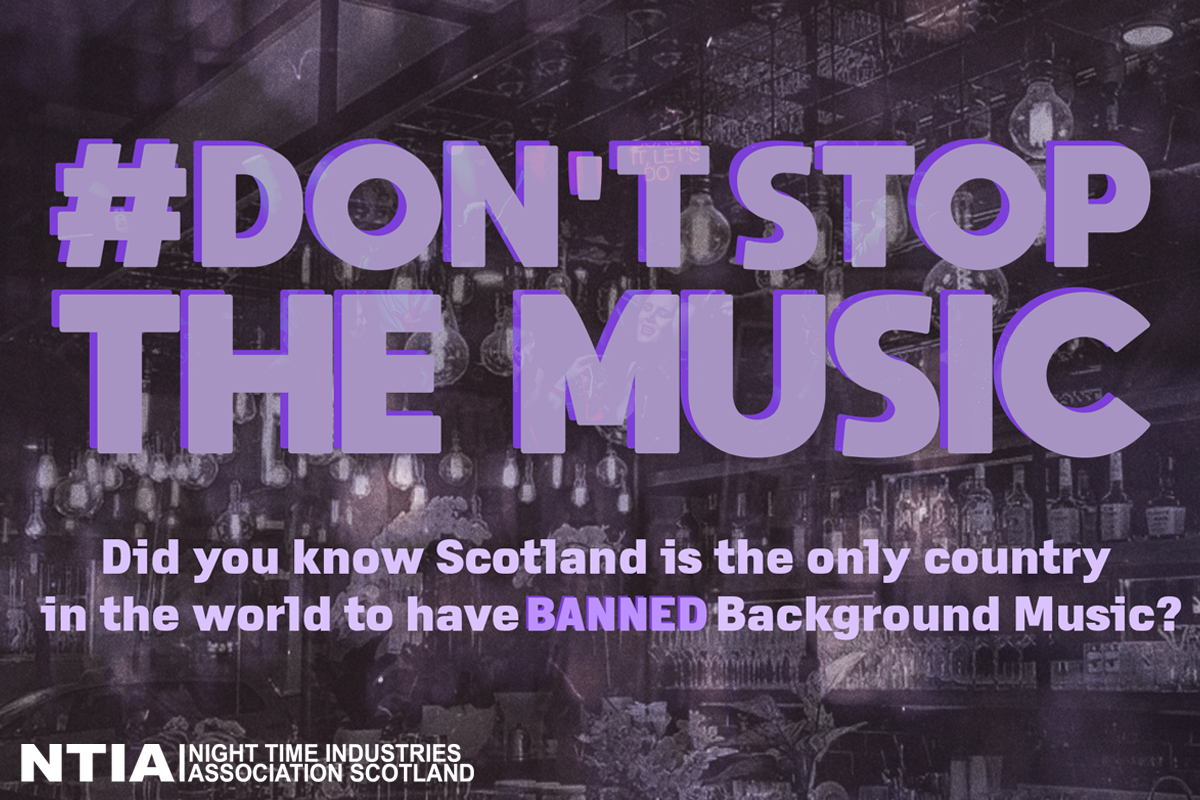 OPERATORS have backed a new campaign calling for an end to the background music ban in Scotland’s pubs and restaurants.

#DontStopTheMusic was launched by the Night-Time Industries Association Scotland (NTIAS) today (September 28) in a bid to overturn the volume veto in venues, amid claims Scotland is the only country in the world with such a measure in place as part of its COVID response. First Minister Nicola Sturgeon announced the measure last month, saying there should be no background music or volume from TVs from August 14.

The campaign, which hopes to raise awareness around the ban by calling on people to share their favourite song of all time along with the #DontStopTheMusic hashtag, is calling for clarity on the reasons behind the measure, which it said is “compounding an already pressurised environment” for the trade.

Businesses backing the initiative are calling for an end to the background music ban and for the introduction of “robust venue-specific measures to ensure operators can set appropriate levels of background music, giving regulators the confidence that it will not interfere with vital public health goals”.

Michael Grieve, chair of the NTIAS, said music is “central to creating a welcoming environment for customers in already struggling venues right across Scotland and is also vital to mental health and wellbeing for staff and customers alike”.

“The total ban on background music is having a severe effect on many hospitality businesses leading to completely sterile environments which some have likened to visiting a library,” he said.

“It seems completely disproportionate relative to other settings and, whilst our industry is totally committed to the serious public health imperatives which the Scottish Government is focused on, our already damaged sector is in serious danger of being permanently wiped out unless this ban is removed.”

Donald MacLeod, owner of Glasgow’s Garage and Cathouse venues, said: “The sound of silence is now killing much of Scotland’s hospitality sector and beleaguered night-time economy; don’t let that be our nation’s COVID legacy.”

Andrew Fleming Brown, managing director of Glasgow venue SWG3, said the ban on background music is “the kiss of death to ambience within the hospitality sector”.

“There has not been any scientific evidence presented to support the ban and, in fact, the only evidence indicates it has the reverse effect,” he said.

And Paul Smith of CGL Leisure described the background music ban as “a step too far”.

“It is a knee-jerk reaction by government mandarins and is based on no scientific evidence,” he said.

“It is counterproductive. Where there is no ambient sound people lean in towards each other when talking which is a greater risk of aerosol spread.”

Stuart McPhee, director of Siberia Bar & Hotel in Aberdeen, said the lack of background music in venues is having “all kinds of profound consequences”.

“But to top it off, the general public are staying away because in their own homes, there are none of these draconian measures,” he said.

Lindsay McIntyre, director at KSG Acoustics, said: “It remains our view that well-managed background music can be safely reintroduced to hospitality settings across the sector.

“We are already working with the Scottish Government to achieve this and look forward to a swift resolution to the ban.”