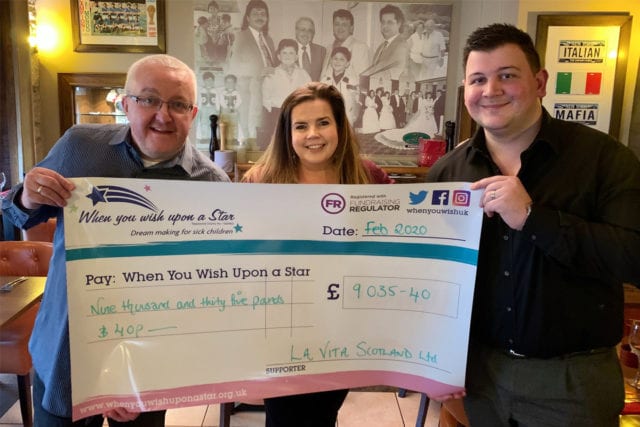 A Glasgow restaurant group has raised over £9000 for children’s charity, When You Wish Upon a Star.

La Vita Group, which counts the La Vita and La Vita Spuntini restaurants in Glasgow and Piccolino e Vino in Newton Mearns in its portfolio, gave diners at each of its five venues the opportunity to donate ten pence from their bill to the children’s charity during the festive period.

The group then matched the final amount raised by customers to secure £9035.40 for the charity, which supports children with terminal illnesses.

Mario Arcari, director at La Vita Group, said: “If we can make a difference to some children and their families and give them reasons to smile, we’re delighted. This proves that sometimes a small donation such as a ten pence piece can go a long way.”

The Italian restaurant group has raised a total of £22,717.40 for When You Wish Upon a Star charity over three years.

Judith King, Scotland regional fundraiser at the charity, said: “We are honoured to have the continued support of our work in Scotland by our friends at La Vita and all their wonderful customers who have generously donated to our work year on year.

“The funds that were raised in 2018 and 2019 turned into magical Lapland invitations for our Scotland trip to Finland in December 2019 where families who met our criteria went in search of Father Christmas!”