IT’S 9.30am on a Thursday morning, it’s graduation week at the University of St Andrews, and the town’s historic streets are already teeming with students in gowns.

At The Adamson, chefs in the 75-cover restaurant’s kitchen are busy prepping for what’s set to be another busy day, with 50 booked for lunch and 170 for dinner.

“There’s the graduations – there are three ceremonies today alone – on top of the locals, tourists, golfers. You can imagine what it’s like the years when The Open is here!
“But it’s great; we’ve got a great team here.”

That the 50 staff – around a third of whom are part-time – take events like this in their stride is testament to the training and systems Julie has had in place since opening The Adamson in April 2012.

And establishing those was paramount.

With a newborn baby when she took on the building in 2010 and her second child born a year after the restaurant opened, Julie has had to ensure that every service runs perfectly – whether she is on the premises or not – from the get-go.

But then she is no stranger to operating venues.

Despite aspirations to go into acting, Julie said she knew from the age of 15 that she wanted to pursue a career in hospitality, and went on to study hospitality management in Glasgow while working in TGI Fridays.

“I either wanted to do acting or this [hospitality] and TGIs ticked both boxes I suppose,” she said.

“I loved working there; it was great. I did all the TGIs roles and then management training with them.”

Experience in unbranded venues followed, with Julie moving to Edinburgh to work in pubs and in events before heading to London and back into branded outlets, including Browns.

But a call from her former TGIs boss in 2005 brought her back north of the border to work with Living Ventures, where Julie spent six years in roles ranging from operations to PR, before there was an opportunity to realise a long-held ambition.

“We had talked about opening a restaurant for years; and my dad (Ken Dalton) said ‘are we doing this?’,” Julie explained.

“We’d had a holiday home in St Andrews for years, and my mum (Marjorie) was there for the weekend and saw that the old post office building was for sale.”

They acquired the property on South Street in early 2010. And it came with quite a history.
Before serving as St Andrews post office from 1907 until its closure in 2008, the property was, in the early 1800s, home to the Adamson family – after whom the venue is named – whose eldest son, Dr John, was a pioneering photographer credited with producing the first ‘calotype’ portrait in Scotland.

Such a historic building brought its fair share of challenges when it came to transforming it into a restaurant – taking 35 weeks to secure planning permission followed by a 53-week build.

And its launch in April 2012 was equally daunting for Julie, her parents and brother Graham, who is also involved in The Adamson.

“It took so long to get it open; and then when I opened that door I thought ‘will anyone come?’” she said.

“I think people thought aliens had landed when we opened because it was something totally different.”

“And it was challenging. All those years of working at Browns and TGIs – in a big company you can phone IT or you can phone HR; but when it’s just you, you’re doing everything.

“My dad’s a businessman and he’s my biggest mentor; he’s so inspiring.

“And I was so determined it was going to work.” 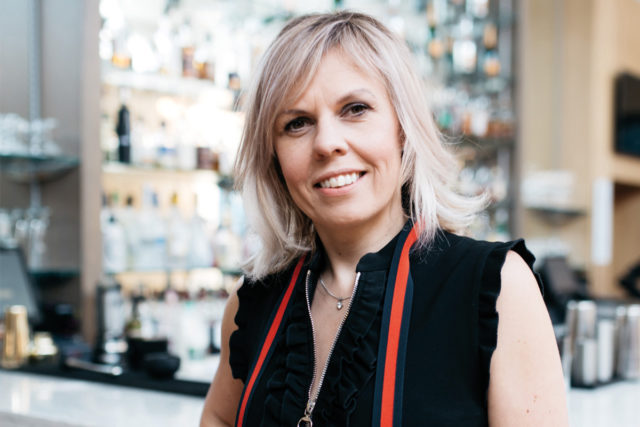 So much so that tweaks were made to the restaurant’s interior not long after opening – Julie said it “had to be big and bold because we were doing something different”; relationships with hotel concierges and golf tour companies operating in St Andrews were developed; and it soon became apparent that more space was required.

So, in 2015, an adjacent property that had been the post office’s sorting office was acquired and transformed into a 150-capacity cocktail bar, which went on to be named SLTN Boutique Bar of the Year for 2018, in association with Grey Goose; the corkscrew trophy joined the SLTN Restaurant of the Year (Casual Dining) Award won by The Adamson in 2016.

The business evolved further still last year when Julie acquired the former burger restaurant next door to The Adamson.

Until her plan for the unit could be brought to life, she utilised the space by giving it an alpine-style makeover and ran it as pop-up bar Ski Lodge for six weeks over the festive season, offering everything from Talisker Hot Toddies to Veuve Clicquot Champagne.

“I had just been at the German Christmas market and then I was reading SLTN and there was a piece about warm winter cocktails and hot toddies and it just went from there really,” said Julie.

“It was amazing; it worked really well for us.”

So successful was the pop-up that she has plans to do something similar again this year, but it’s likely to be in the cocktail bar because the start of 2019 saw work to permanently transform the adjacent unit get underway.

And, in March, Julie opened Next Door – a 35-cover “healthy breakfast, brunch and lunch spot”, which is also used for private dining, large groups and events in the evenings.

“It’s very different from The Adamson. The Adamson isn’t fine dining but it’s more traditional service – lunch and dinner. In here (Next Door) you can come and eat when you like; it’s a different style of food too.

“It’s been steady expansion for us.

“Now we’ve got three units next to each other that do very different things. I think Next Door just completes it all.”