GIVING locals what they want might sound like a straightforward approach but it’s one that Arun Randev has advocated throughout his 40-year trade career.

And it continues to underpin business at the Livingston Lodge Hotel, which he and his family have owned for the past 13 years.

From staging Christmas parties for regulars in the bar to catering for family celebrations and events, the hotel has been firmly established at the heart of the Livingston community.

“It sounds simple but it’s all about giving the locals what they want,” said Arun, who has owned various licensed trade businesses down the years, including The Bon Accord, BarCelona and Cosmopol in Glasgow; and still counts the city’s Kelvin Hotel and Jessie Mays Bar & Kitchen on Edinburgh’s Gorgie Road in his portfolio.

“I know them all by their first names. We look after the locals. There’s a lot of families around here; we want them to feel like this is their home.

“If they’ve got an occasion we want them to come to us and know they can have confidence in us.

“It’s small things but they make a difference.” 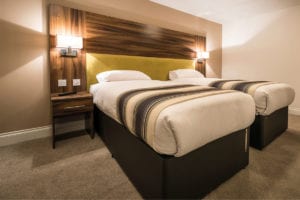 Certainly the changing face of the local community – and society as a whole – has had a bearing on the development of the business over the past 13 years.

After refurbishing the public bar at the front of the hotel – a project which saw the installation of seven big screens with the focus very much on live sport – the Randevs turned their attention to what was then a nightclub; closing that part of the business off, they subsequently transformed the space into additional accommodation, taking the hotel from 14 letting rooms to 24 to cater for increasing demand from both business travellers and leisure guests visiting the area and attending events in the hotel’s function suite.

However, perhaps the biggest change came last year when the Randevs decided to move their established Oscars restaurant from the premises it had occupied for eight years – half a mile away from the hotel – to within the hotel itself.

It was a big decision for the family, but it was a move they had been keen to make.

The restaurant within the hotel had been leased out and traded as a Chinese restaurant. But Arun’s son Ritz said with the lease coming to an end – coupled with soaring business rates for the separate unit – the time was right to make the move.

So they embarked on a four-week, £150,000 refurbishment of the space, which saw it stripped back to a shell and rebuilt.

The result is a bright and airy eatery with warm, neutral decor. The space is kitted out with a combination of booth seating running up the centre of the space and loose tables and chairs, contemporary light fittings and a feature wall of different-shaped mirrors.

It sounds quite simple but it’s all about giving locals what they want.

When it comes to the food, the emphasis is very much on Italian. And the new-look Oscars features a much more slimline menu than its predecessor.

“This used to be an Italian restaurant before so we wanted to revive that and also tie in with the whole burger resurgence and bring that to Livingston. The old Oscars had about 120 dishes on the menu so we’ve scaled that back; our GP is more controlled.

“I think the restaurant and hotel now complement each other.”

And, it’s not just inside the hotel that the new-look Oscars has made its mark.

After the eatery opened last October, the Randevs introduced a home delivery and takeaway service to Oscars, which already accounts for 15% of the business.

They have now turned their attention to developing an al fresco decked area outside the restaurant in time for summer; and refreshing the 100-capacity function suite.

The focus will then shift to Jessie Mays in Edinburgh, which is slated for a refurbishment project in July that will see a wall moved to create more space at the bar.

And the family hasn’t ruled out further acquisitions.

“We’ve always got something bubbling away in the background,” said Ritz.