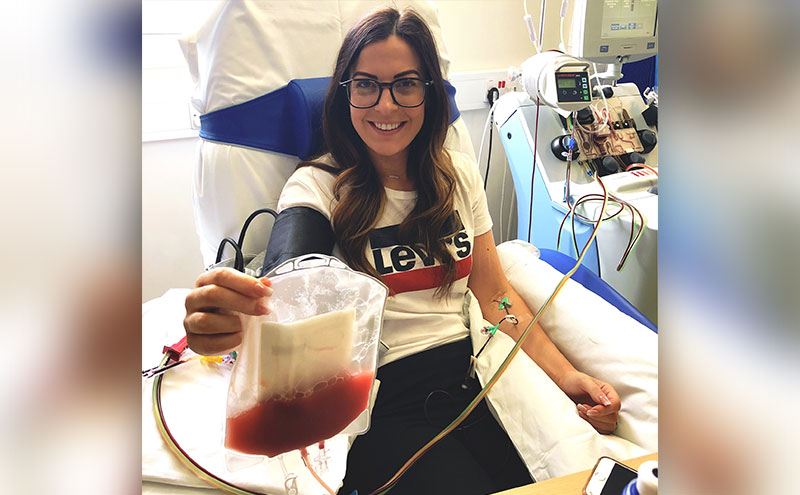 A DRINKS company account manager is encouraging other people in the on-trade to register as stem cell donors after recently donating her own stem cells for a transplant.

Fiona Dickie of Asahi told SLTN that she was inspired to sign up three years ago after seeing stories about the death of Bradley Lowery, a child who passed away before an appropriate donor could be found.

“After watching that story and reading about it I thought, ‘that’s something that I need to be on’ – that everyone should be on really,” said Fiona.

“I remember reading about it and I wasn’t aware there was a separate donor list to organ donation.

“So I just thought ‘I’ll sign up’, because when you go through the website they say you could be on their donor list for years; it’s a really small chance of ever being matched to somebody.

“I’d been on the list for about three years and never really heard anything.”

But that all changed recently.

After receiving a call to say she was the best match for a cancer patient in urgent need of a stem cell transplant, Fiona was on her way down to Sheffield Hospital to have a three-hour medical – and earlier this week (March 4) she was back down to begin the donation process, which took around five and a half hours.

“As I was in the hospital finishing up with my donation, there was a courier driver who works for the NHS right beside me basically getting ready to take my stem cells and give them to this person within 24 hours,” said Fiona.

“So honestly it’s quite incredible the way that they do it.”

“I think what the most important part of this story is usually when it comes to stem or blood cell donors, they typically go for, they try and mirror the recipient.

“In my case it was a man who was 15kg heavier than me and the doctor came round whilst I was on the machine and said my donation was particularly precious because they couldn’t find a man on their database that mirrored the same DNA as what this man needed, therefore I was the only person on their database in the UK that could donate to this man.

“Only 2% of the UK is actually registered. Imagine if more people were on it then that man could maybe have had [options] of multiple donors.

“It’s quite overwhelming in that sense, but fingers crossed that the donation helps him.

“And I should be able to find out his progress within six months, which is really nice.”

Fiona added that Asahi was supportive of her decision to donate, granting her ‘volunteer days’ (meaning she did not need to take holidays or unpaid leave) when she was in Sheffield.

And, ultimately, Fiona hopes that by talking about it, she can encourage more people to sign up via either DKMS or Anthony Nolan.

“I’m a massive advocate of talking and telling people about it because I didn’t know about it before I signed up,” said Fiona.

“And the number of people I’ve spoken to recently about it that don’t know about it is incredible.