First-time operator is making an instant impact at Kelso bar

THERE is a saying about intelligent people having doubts, while fools are famous for rushing in.

And it rang true for Brian Caithness, who, after two decades in hospitality, had constructed a CV which looked something akin to a Michelin guide.

Edinburgh’s Cafe St Honore, The Bon Vivant, the former Oloroso and The Dogs restaurants in the capital as well as The Gannet in Glasgow’s west end are amongst those to have called upon his skills in either front of house or management roles.

Yet even after gaining such experience, when it came to taking over his first business as owner – a pub in the market town of Kelso – the prospective licensee had some apprehensions.

“It had always been something I wanted to do,” said Brian. “So I had to strip away all the false barriers that I had constructed in my own head and focus on what I wanted to do.”

The biggest of the barriers for Brian was moving to the Borders town, a settlement he wasn’t familiar with, but he was prepared to sacrifice the central belt for a venue he believed had promise.

“I could clearly see what I wanted to do with the site when I first saw it,” he said. 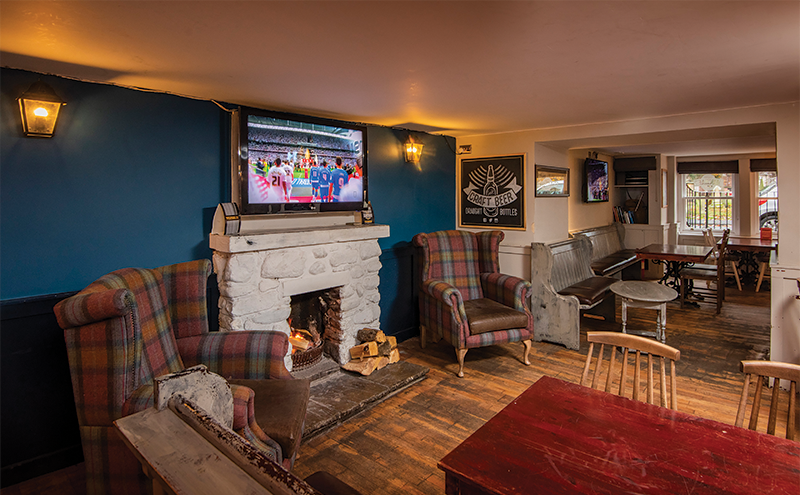 Taking on the lease to the White Swan as it was in 2017, originally with Punch Taverns before it moved over to the Star Pubs & Bars estate as part of the firm’s major acquisition deal that year, Brian embarked on revitalising the pub by expanding its clientele and improving its food and drinks offer.

A comprehensive refurbishment and renaming of the bar took place. Out went the White Swan and in came The Tipsy Ghillie, a quirky nod to the Caithness family’s gamekeeping heritage and Kelso’s own renowned nearby fishing spots.

“The vibe was it was a good traditional pub but maybe not a venue in which everyone was very comfortable,” said Brian.

“I wanted to keep that good boozer side but give it a modern element, work on the atmosphere and premiumise the offer a bit.”

Chief amongst the changes was the transformation of a disused coffee shop at the front of the unit into a thriving café/bistro, which serves everything from scones, soup and sandwiches to seasonal dishes, tapas and wine that wouldn’t be out of place in Brian’s former workplaces.

“The focus is on food that is healthy and fresh,” he said. “Beyond the traditional pub offer, the bright, fresh vegetable dishes are proving really popular.”

Off the back of its menus, a new band of loyal daytime regulars has sprouted.

“The feedback from them is that the freshness and healthiness is what brings them back,” said Brian.

The venue’s broader appeal is clear to those who enter.

“When I took over the pub, it was male-dominated,” he said. “Now a whole cross-section of the community, including women and young people, are coming in as well as visitors and tourists.”

The debut licensee is now being recognised for his success, having been named a finalist for Newcomer of the Year at the 2019 Star Awards.

And good old fashioned hard work has been vital to that progress.

“You’ve got to put the effort in to get the result,” said Brian. “Obviously you need your staff to understand what you’re doing but it’s mostly just knowing your audience.”