SET against a backdrop of the three bridges and the Firth of Forth, it’s arguably an apt location for Buzzworks’ latest venue, Scotts at Port Edgar Marina, in South Queensferry. Not only does it offer uniquely impressive views from the restaurant and bar, it’s also somewhat symbolic, as the venue represents the Ayrshire-based group’s first crossing to the east of Scotland.

It followed that Buzzworks, which operates ten other venues under four brands – Scotts, House, Lido and Elliots – pushed the boat out with its latest venue, bringing together a raft of elements that have already cemented the group’s reputation in the west.

Speaking to SLTN, Colin Blair, one of Buzzworks’ directors, admitted that Scotts at Port Edgar Marina, which is the largest of the brand to date, is a big deal for the group.

“It’s a test for us outside our home territory on an iconic Scottish site,” he said, adding that the resulting venue is “eclectic, honest and aspirational all at the one time”.

Similarly, Stephen Buchanan, who has taken up the role of operations manager for the east coast, told SLTN: “It’s a massive step for everyone in the business, expanding out to an area that’s unknown.

“But that’s why we’re so committed to doing things the right way.”

Working with a select, trusted team of contractors, including Glasgow-based designer Jim Hamilton of JH Design, and Ayr-based ARPL Architects, a conscious effort was made through the 17-week transformation to take full advantage of the venue’s setting.

Residing in the previously disused space above the marina’s Bosuns Locker, Scotts at Port Edgar Marina’s unique boat shed facade now features a wall of windows, providing diners with impressive views across the Firth of Forth. 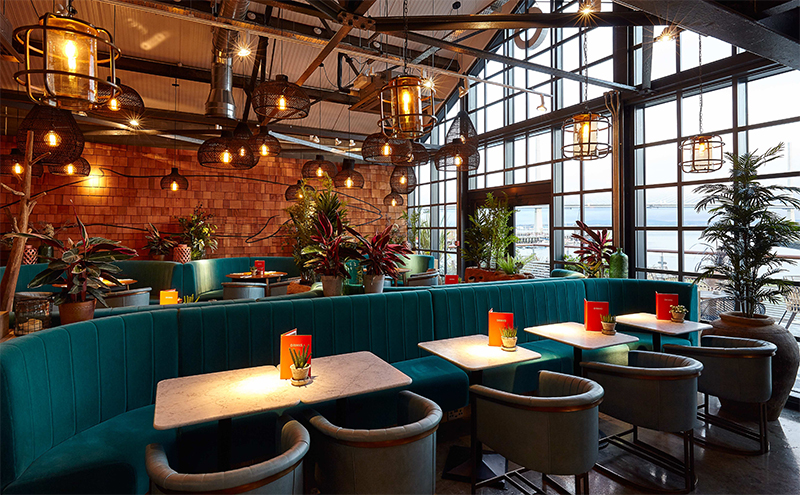 A horseshoe-shaped bar dominates the centre of the space, acting as an organic divider between the bar and the restaurant.

“Through not having a middle gantry as such, it does open up the building, which is fantastic – so operationally you can see everywhere.

“But it also creates a subtle division between informal and formal.”

It’s a move which the team deemed necessary due to the venue’s size. With a total capacity of 190 covers – 100 in the bar area and 80 to 90 in the dedicated restaurant space – this Scotts also features a ‘snug’ area, located towards the front of the venue, in which booth seating, a television and views across the water take centre stage.

“The snug is where we envisage people coming in for coffee and cake, breakfast, etc.,” said Stephen.

And, unlike its sister Scotts outlets in Troon and Largs, the east coast venue also has a private dining area – an element inspired by Buzzworks’ House brand.

“We were looking at the Scotts in our estate, we don’t have any private dining spaces in them,” said Stephen.

“[But] they’ve been a great success through our House brand.”

Therefore the decision was made to create a private dining space at the rear of the restaurant, which Stephen reckons will prove popular with those looking to celebrate special occasions.

Other notable differences include a seafood display (other Scotts venues feature a fish tank ‘wall’), which is set into the main bar, allowing chefs to prepare dishes directly in front of customers.

It complements the restaurant’s open-plan kitchen, which Stephen noted is a design trend “that’s really current at the moment”.

And food is a hugely important part of the offer.

On board to oversee the smooth operation of the kitchen is Craig Hogarth, executive chef for the Scotts brand at Buzzworks. 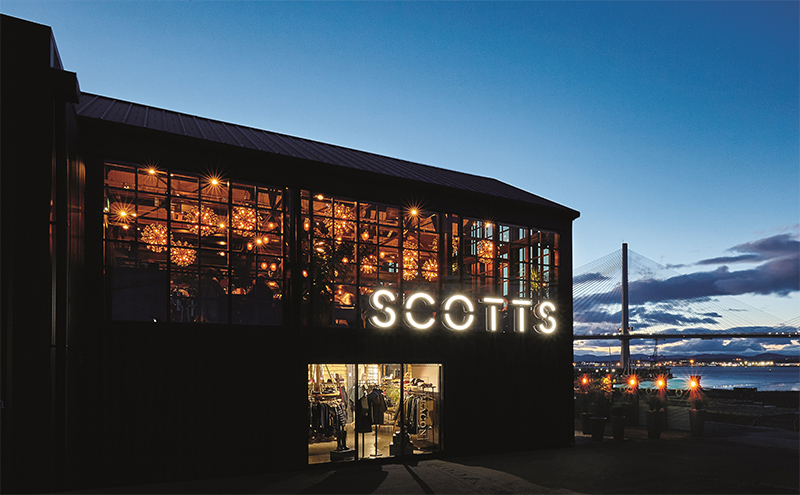 And, similar to the approach in the west, various local suppliers are utilised, including the likes of Campbells Prime Meat, in Linlithgow.

On the drinks side, as well as working with Tennent’s and Inverarity Morton, the venue stocks beers from smaller producers, including Edinburgh-based Stewart Brewing and The Ferry Brewery in South Queensferry.

Also on the taps is Scotts’ very own brew – Set Sail, which is “a light, refreshing, slightly hoppy” 3.6% pale ale brewed in collaboration with Broughton Ales.

Meanwhile, Scottish spirits from the likes of Isle of Harris Gin and Edinburgh Gin to Dark Matter Rum adorn the back-bar.

Ultimately, Stephen said that the key aim is to establish the Scotts brand in the east.

“Our main focus is to set this one up right and ensure that we set it up for success, so it can become a roaring success like Scotts [in] Troon and Largs,” he said.

Blair added that Scotts at Port Edgar Marina, which officially opened late last month, has already been well received – but said despite the group’s continued success, he never takes it for granted.

“We’ve had a fantastic reception,” he said.

“We’ve only turned the tap on by about 60% capability so far.

“The response has been really good. That’s the response that really counts; it’s all down to customers.

“We’re on our toes, rather than our heels. You can’t take anything for granted in this game.”

Buzzworks has further confirmed its commitment to the east coast with the purchase of The Bridge Inn in Linlithgow, which is set to undergo a £750,000 refurbishment to become a House venue later in the year.