Craft is right at the heart of SLTN Award-winning pub

GLASGOW pub Inn Deep has craft beer in its DNA.

The venue, which last year picked up the SLTN Craft Beer Award, in association with Keith Brewery, is run by managers Sandy MacMillan, Amy Williams and Hamish Louttit, and is owned by Inn House Brewing, a sister company of Scottish craft brewer Williams Bros.

Having opened its doors in 2012, in time to catch the beginning of the current ‘craft boom’, the Kelvinbridge bar was last year refurbished to expand both its floor space and its range of beers.

While Scotland’s wealth of craft breweries are top priority, the bar also stocks a wide range of beers from overseas, and is one of US and German brewer Stone’s ‘cornerstone’ venues – a partnership that gives Inn Deep early and exclusive access to some of the brewer’s beers.

Since we’ve had more taps, our fridge has become a bit more diverse.

The guest taps are divided by either brewery or beer style, so fans of Stone Brewing know there will always be one of the brewery’s beers on tap, with other taps dedicated to saisons, Belgian lambics, stout and wheat beer respectively.

And the expansion of the taps has had a direct influence on the range in the fridge, according to Sandy.

“Since we’ve had more taps our range in the fridge has become a bit more diverse,” he said.

“We’ve got the full Williams and Drygate ranges in. That’s a given. 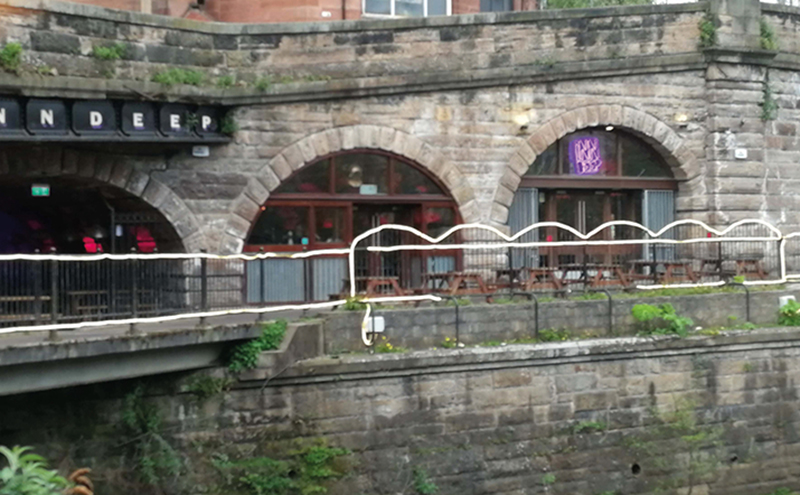 “We try and have as many Scottish bottles in as we can, ones that we know will sell or if there’s an interesting one.

“At the moment we’ve got Cromarty’s Double Rocker, which is a ridiculously interesting red.

“Can-wise, Beavertown ones fly out, we always look for a couple from Magic Rock. Salty Kiss is a big one.

“And they’ve got a nice new gluten-free one called Phantasma.”

The bar stocks five gluten-free beers in total, as well as three non-alcoholic ones.

“You’ve got to cater to everyone’s needs,” said Sandy.

And customers are kept up to date through social media app Untappd, which the bar uses to promote its beer list.

Sandy said: “You’re instantly getting a bit of information without even having to speak to anyone.

“So you’re coming in to the bar as a customer with a little bit of knowledge.

“You can be sitting at home and get a full description of each beer in the app.

“The traffic we get from it (Untappd) is more than I ever expected it to be.”

But a broad and regularly changing range of beers is only part of the reason for the outlet’s continued popularity with craft beer fans, said Sandy.

Relationships with breweries have been equally important to the venue over the past six years.

In addition to Williams Bros and Drygate, which the venue has close ties to for obvious reasons (Drygate is a joint venture between Williams Bros and Tennent’s), and Stone Brewing through the aforementioned cornerstone programme, Inn Deep has hosted ‘meet the brewer’ or tap takeover events, with brewers including Tiny Rebel, Goose Island, Fierce Beer and Beavertown.

We try and have as many Scottish bottles in as we can; ones that we know will sell or are interesting.

A close relationship with craft beer supplier New Wave has helped put the team in touch with brewers in Scotland and further afield.

“New Wave are a good help to us,” said Sandy.

“They are our main supplier that isn’t Williams.

“[New Wave] there does a great job of letting you meet people and bringing people in to meet you when they’re up visiting the area.

“Obviously he wants you to buy beer from him, but the [brewers] get to see where their beer is being sold and that’s what sells them on coming in and using here as a launch place for things.”

The events will continue in the months ahead, with food pairing expected to be a focus later in the year.

Sandy said: “We’re looking to do themed food nights. You can be ridiculously creative with food pairing.

“You can have five dishes with five beers, tie in a brewery visit with the food. I think beer and food nights will be a bigger focus, rather than just pairing beers with the standard menu.”

The team is also preparing to put its money where its mouth is with the launch of its own beer.

Still unnamed when SLTN visited the venue, the 6.66% ABV New England-style IPA was developed by Hamish and Chris Williams using the brewkit at Drygate, and was scheduled to be launched at Inn Deep today (May 10) along with some other special edition Drygate beers.