Stevie Dickson has been helping Scotland’s pubs to pour the best possible pint for over a decade. Here, he explains to SLTN how the new Tennent’s Lager Care campaign is an important step towards achieving the perfect pint in pubs across the country 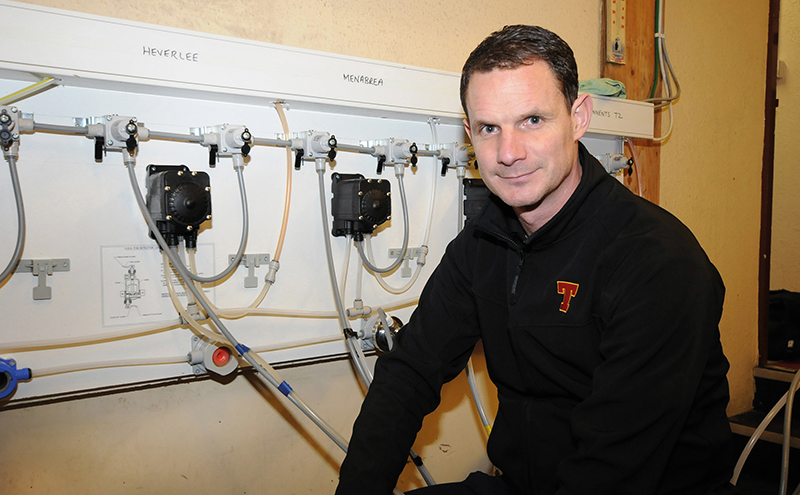 TO say that a top quality pint is important to Stevie Dickson at Tennent’s would be an understatement.

As part of the quality team for the brand, Stevie has been working with Scottish publicans for over a decade, installing dispense equipment, providing training and checking standards in the cellar and front of house to ensure outlets are pouring the best pints possible.

Quality dispense has always been important to Tennent’s, but the company is ramping up its support for the trade this year with the launch of the Tennent’s Lager Care (TLC) programme.

A free-to-access training service provided through the Tennent’s Training Academy, with follow-up support through the MyTennent’s trade website – an online portal for customers including training tools plus business and marketing advice – the programme was developed by Stevie and quality team colleague Paul Welsh along with former technicians and members of the training academy team.

The starting point was looking at some of the quality issues Stevie and Paul encounter in pubs on a daily basis.

Although keen to credit the passion of Scotland’s licensees, Stevie said that, in many cases, bad habits have been passed down for years with regard to cellar management.

“A lot of what’s been passed on is wrong,” said Stevie. “But because it’s been passed down from Jimmy, who’s run the pub for 30 years, it must be right. Well, not necessarily.”

Stevie produced a presentation for colleagues in the marketing and sales team to demonstrate what he sees on a day-to-day basis.

“It was an example of what I see out in the field every day,” said Stevie. “Now, how are we going to fix it? Claire Arnott, (Head of Customer Marketing at Tennent’s) described it as a challenge worth stepping up to.”

The answer was to develop a training programme, based on the field training delivered by Stevie and Paul, which covered the most important areas of cellar management and included hands-on experience.

“People want to do things,” said Stevie. “They don’t want to just sit in a room and stare at a screen.

“The [online resources] back it up, but there’s practical training. So we go from keg all the way to leaving the cellar. And it’s every aspect of how the cellar works: the cleanliness, tidiness, line cleaning, how the equipment works, which is very important.

“There’s been a lot of changes in equipment and there’s not been much education on how things work.” 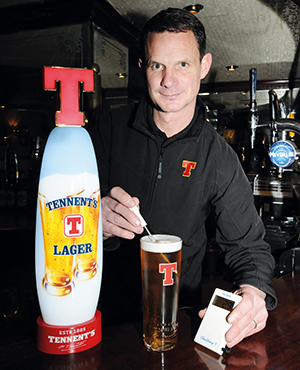 Critical areas such as cellar temperature and cleanliness, line cleaning and glassware care are covered in detail.

Stevie explained: “We say ‘people, process and product’. So if the person has been too busy to clean the lines right, you’ve got a problem.

“If the cleaning process isn’t right you’ve got a problem.

“And the wrong cleaning product, even if you’ve got the other two parts right, can give you dirty lines.”

As well as sharing best practice, the training also dispels some common myths that have found their way into cellar management practices in outlets – for example, the mistaken belief that beer nozzles should be cleaned in soda water.

“We see that as a huge problem,” said Stevie.

“I find nozzles everywhere that are pretty horrendous. Five out of ten pubs will have their nozzles in soda water. That is not cleaning their nozzles.”

When the training session is complete, it’s time to put that knowledge to the test.

Each class will be split into teams, with each team taking a turn in the ‘Lock-in’, an industry first beer cellar-themed escape room within the Tennent’s Training Academy where participants will be tasked with identifying several faults in the quickest time possible.

After they leave the academy, licensees will be able to view refresher videos on each of the training areas via the MyTennent’s website. It is hoped that managers will also be able to use these resources to filter the training down to their teams.

While top quality pints are important to Tennent’s as a business and as a brand, improving an outlet’s beer quality is also beneficial to operators, said Stevie, both in terms of saving them money in the cellar and protecting the outlet’s reputation.

“The consumer is far more educated now,” he said.

“They’re spending a lot of money on a pint, and increasingly drinkers are demanding a good quality pint. I think people are now willing to challenge licensees.”

The TLC programme got underway this month with Tennent’s sales and customer-facing staff undertaking the training. The first groups of licensees will go through the course in May.

To find out more about Tennent’s Lager Care head to www.MyTennents.com