Refurbishment of Islay business has been years in the making

ON the shores of Loch Indaal, on the island of Islay, lies the village of Bowmore.

Home to what’s thought to be Islay’s first recorded distillery (established in 1779) – and one of the oldest in Scotland – the village, much like the island generally, is renowned for its whisky production.

And, much like whisky production, both time and patience underpinned the Maclellan family’s approach to the refurbishment of the Bowmore Hotel, which was completed recently having begun when they bought the business back in 1984.

“So we did it as we could afford it without borrowing any money from the bank.”

With an initial refit of the hotel completed by the late 1980s, Linda and husband Peter took on a second business, the White Hart Hotel, in 1992. The acquisition of the hotel in Port Ellen, ten miles from Bowmore, saw Linda leave her job at an insurance firm and move into the trade full-time to run the business, with Peter managing the Bowmore.

We’re looking to make this a family business for as long as we can.

While Peter, who was born on Islay and whose family owns a hotel across the water in Port Charlotte, was well-versed in the trade, for Linda, running the White Hart was a formative period in her trade career.

“I started and it gave me great grounding,” she said.

“I could always cook but maybe not for these quantities – and I used to do weddings.”

Come 1999, the couple sold the White Hart so they and their son Peter could focus their efforts solely on the Bowmore. 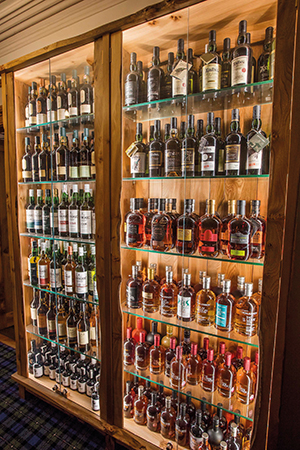 “We made the decision, if we’re going to concentrate on one hotel, it was going to be Bowmore,” said Linda.

From then, improvements to the Bowmore continued – with an ambitious nine-year refurbishment having recently come to a close.

Working with Paul Hodgkiss of Glasgow-based Paul Hodgkiss Designs – a hand-crafted wood furniture and fittings firm, among others, Linda and Peter redesigned and refurbished the public bar (100 capacity), followed by the lounge bar (30 covers), dining room (30 covers), and hall, before moving on to the hotel’s 11 bedrooms.

Keen to use natural materials throughout, Scottish Elm features downstairs, while wood sourced from Dunlossit Estate on Islay – Ash and Sycamore – is used upstairs. And slate from the island’s beaches has been used in some of the bedrooms’ sinks.

With the refurb finally complete, Linda and Peter said they couldn’t be happier with the team’s work.

“It’s over a long time, they’re our friends now.

“I would call it a boutique hotel now; there’s a lot of really unusual bits and pieces.

“It’s back to being a living, breathing building.”

We wanted to do the refurbishment work as and when we could afford it.

Naturally, the Bowmore Hotel’s drinks offer is centred around whisky – specifically, Islay malts. In total, there are around 750 whiskies for sale at the bar, with the Maclellans’ private whisky collection totalling around 1500.

“We’ve got some Bowmore whisky that they don’t have [at] Bowmore distillery,” said Linda.

“In fact, they have borrowed whisky from us because they needed specific ones that they didn’t have any left of.”

At the bar, all the island distilleries’ whiskies tend to prove popular, with particular demand for malts from Bowmore, Bunnahabhain, Bruichladdich, Laphroaig, Lagavulin and Ardbeg, according to Linda, who said the hotel’s whisky range is very much in the hands of their son Peter.

“He’s extremely good at what he does; if Peter’s interested in something, he goes all out – and he can tell you anything about whisky,” said Linda.

And whisky is set to remain at the heart of the Bowmore Hotel for the foreseeable future, with plans for a new whisky bar.

“We’re looking to make this a family business for as long as we can keep it going because it’s a very successful hotel,” said Linda.