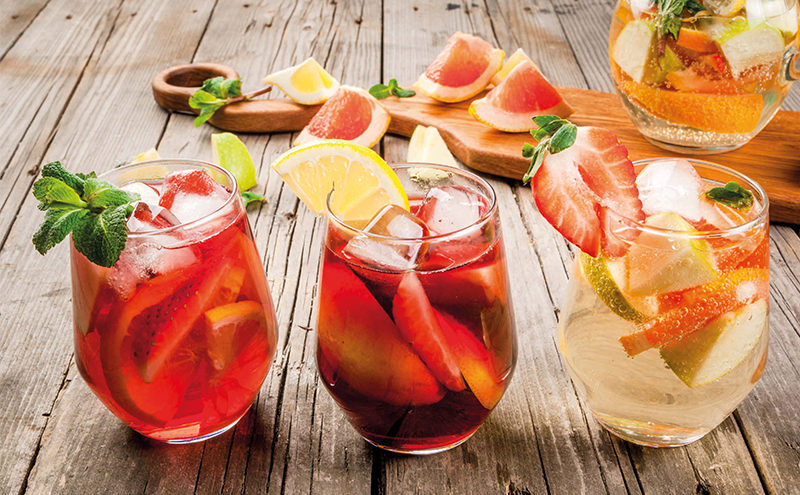 FRESH, fruit flavours are likely to be among the most popular choices once more as Scotland’s bars and pubs prepare for summer.

While bar-calls such as premium gins, craft beers and cocktails are likely to continue to sell well throughout the summer and beyond, drinks firms expect customers to opt for the sweeter, fruitier flavour profiles usually associated with the season.

“Summer is all about those fresh and invigorating flavours and aromas, such as zesty fruits and fresh florals,” said James Wright of Halewood Wines & Spirits, owner of brands including Aber Falls gin, Hawkshead beer and Crabbie whisky.

“A solid summer drinks menu should consider different flavours, formats, and styles, as well as a good balance of alcoholic and non-alcoholic options to satisfy growing consumer demand in the latter and a range of occasions.

“Every summer drinks menu should also embrace the country’s growing cocktail culture and offers a great opportunity to start experimenting with new recipes or reworking the classics to incorporate more seasonal flavours.”

Wright’s comments were echoed by Andrew King, managing director of cocktail mixer firm Funkin, who said bartenders can expect to see the traditional summer flavours of citrus and berry joined by apricot in 2018.

“Growing from the popularity of the peach Bellini, apricot has found its way to the forefront of drinks menus by providing bartenders and consumers a complex flavour profile,” said King.

Fruit flavours aren’t likely to be limited to long serves and cocktails either.

Belhaven managing director Clive Chesser said with craft beer booming, the “popularity of fruit flavoured IPAs is growing sharply and is likely to be huge again this summer”.

And Global Brands, the firm behind VK and Hooch, anticipates increased demand for fruitier varieties of RTD, making that style of drink “an essential choice for those looking to drive footfall of millennials this summer”, according to brand controller Christian Sarginson.

“The RTD category is worth £200 million in the on-trade and is ideally suited to summer as people’s tastes move from indulgent and warming flavours to those that are light, fruity and refreshing,” said Sarginson.

While Scots are well practiced at staying in a summer mood, even in the face of appalling weather, there are some steps licensees can take if they want to hedge their bets in terms of summer drinks.

“Stick to spice if you want to cover all bases when it comes to the Scottish weather,” advised Louise Hamill of Pickering’s Gin.

“Long serves with ginger ale and ginger beer can be equally refreshing and warming.”

The merits of ginger beer were also extolled by Sailor Jerry brand ambassador EmmaLi Stenhouse, who said it is an ideal summer mixer for rum.

She said: “Rums mix well with a wide range of flavours, depending on the style and characteristics of the rum in question.

“For example, a lighter dry style rum with tonic is a refreshing summer cooler, but a heavier spiced rum with ginger beer is a match made in heaven as the fiery notes bring out the unique spices in the rum.”

While flavour is obviously the biggest consideration when deciding whether to include a drink on a summer list, it’s also important that any serve looks the part.

Bob Fowkes, co-founder and marketing director of Brockmans Gin, encouraged licensees to serve their summer drinks in “a mix of glassware and taste styles, not all highball drinks”.

And with regard to cocktails, he urged licensees not to “lose the theatre of cocktail-making that is a vital part of the promise”.

That said, firms said it will always be important for venues to be able to live up to their drinks lists. There’s no point adding ambitious cocktails that surpass the talent of the bar staff.

“Don’t over-complicate serves; match the drinks menu to the bar skills available,” said Dan Bolton, managing director of Hi-Spirits, the firm behind Southern Comfort and Buffalo Trace in the UK.

The sentiment was echoed by Eden Mill co-founder Paul Miller, who said that, while it’s a good idea to include seasonal fruit flavours during the summer, an effective summer drinks list needn’t be complicated.

“Don’t over think it,” said Miller.

“The classics are classics for a reason and people love them. It’s hard to beat a great gin and tonic, but do experiment with garnishes and mixers if you are looking to create something a little different.”

As ever, the key to making the most of the summer season will be planning ahead, according to Alan Hay, on-trade sales director at Tennent’s.

“Order sufficient levels of best-sellers and ensure you have enough staff on rota when it’s likely to be busy,” said Hay.

“This will keep consumers in good spirits, spending money and make them more likely to return.”

If in doubt, speak to your suppliers, was the message from Amy Giacobbi, marketing manager at CWF.

“With the unreliability of the British weather the key is to be prepared in advance so that if there is a spell of warm weather pub and bar owners are not caught on the hop,” she said.