FOR a pub situated between two graveyards, The Diggers in Edinburgh has plenty to make its substantial body of patrons smile about.

Officially known as The Athletic Arms, the 120 year old Victorian pub takes its nickname from a long association of slaking the thirst of grave diggers who needed a drink after a long, and presumably gloomy, day of burying the dead.

“It was not uncommon to have pickaxes and shovels resting against the bar in here after five o’clock,” said operator Kevin McGhee, who took on the lease with Star Pubs & Bars in 2010.

“So the pub started being called The Gravediggers locally, which over time became abbreviated to The Diggers.”

We get so much from Hearts that we want to give something back to them.

Although there’s no sign of any mud in the venue now, the pub has retained the best of its historic charm with tiled flooring, oak fittings, a marble-topped bar and maroon colour scheme which heralds the pub’s other association, to nearby football club Hearts – Tynecastle Stadium is less than ten minutes walk away.

“I always wanted to have my own pub,” said Kevin.

“I have always been a people person, the paperwork side of things not so much.”

After a few years in the trade, a chance to work at The Diggers presented itself in 2005; and when the lease became available five years later Kevin, having fallen in love with the Gorgie institution, wasted no time in securing it for himself.

Although there was the small matter of the new lessee’s allegiance to bitter rivals Hibernian.

Kevin is a dyed-in-the-wool fan of the Hibees – his Uncle Alex even played for Hibs in the 1970s – and he still likes to get along to Easter Road when he can despite running a well-known Hearts pub.

It hasn’t caused any problems on either side of the bar, however.

On the contrary, Kevin said there’s been plenty of good-natured banter with his Hearts-supporting regulars. 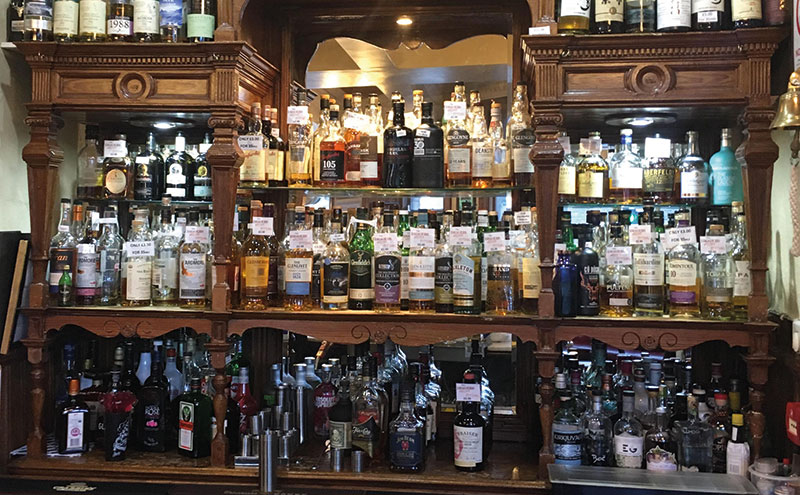 Kevin won BT Sport’s Manager of the Month for December for building strong links with the Jambos and their fans.

And when the club ran into financial problems a few years ago, The Diggers purchased shares in Hearts and held a number of fundraising events for the cash-strapped outfit.

Kevin said: “We get so much from Hearts [in terms of footfall] that we want to give something back to them.

“Last season we sponsored eight players and we have added to that by sponsoring new signing Steven Naismith’s shirt as well.”

Indeed, the relationship between the pub and Hearts fans is such that supporters’ forum Jambo’s Kickback helped fund a defibrillator for behind the bar, which all staff have been trained to use in the event of an emergency.

The pub gets packed out when Hearts are playing at home but Kevin said he and his pool of 18 staff members manage to work efficiently to get everyone served quickly. 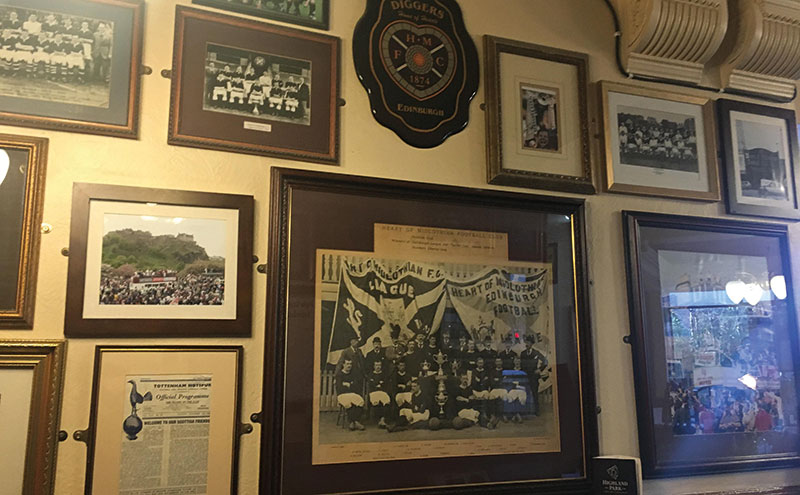 “It can be challenging running the pub on a match day,” he said.

“It’s standing room only, but what we’ve managed to do is create a good atmosphere that  means grandparents, parents and children can all come in and enjoy themselves.

“It’s less about singing in here and more about chatting with fellow Hearts fans and slagging me off.”

While football plays a key role in the pub’s offer, with live games on almost every night of the week, the bar has also picked up a great number of repeat customers from showing Six Nations fixtures; it’s in close proximity to both Murrayfield and Myreside, the current home of Edinburgh Rugby.

But Kevin pointed out that the pub is popular enough in its own right to not depend solely on sport.

I always wanted to have my own pub. I’m a people person.

“I always say the regulars pay my bills and the football is my profit,” he said.

When he first took over the pub eight years ago, his immediate move was to increase the bar’s whisky range (pictured below), which now numbers over 350, including a selection of rare drams.

Six casks and 14 kegs on at all times provides the variety the venue’s beer connoisseurs are looking for as well, whilst a recently-expanded food offer has been driving the wet-led pub’s revenues up 10% compared to this time last year, said Kevin.

He added: “We’ve been doing a lot more pies, toasties and nachos and were voted best pub pies in the city by Edinburgh CAMRA.

“It’s helping us in the afternoon due to the fact that we’re busy enough at night.

“We’re mobbed most nights of the week.”