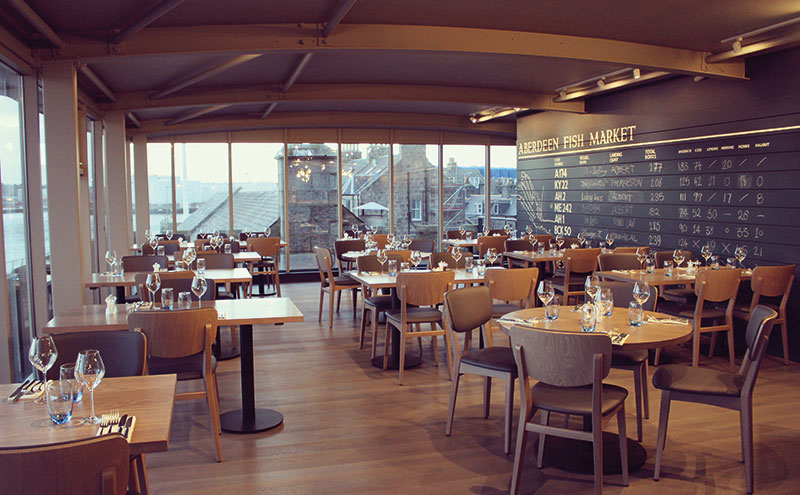 AN Aberdeen restaurant overlooking the city’s harbour has been relaunched following a major refurbishment.

The Silver Darling on Pocra Quay in the Footdee area of Aberdeen – a fishing village at the east end of the harbour known locally as ‘Fittie’ – was revamped by parent company McGinty’s Group, which bought the eatery last September.

Designed by Nicoll Russell Studios, the new-look interior features a hand-painted ‘fish market’ board and a glass installation by local artist Shelagh Swanson, which features historic pictures of Footdee.

McGinty’s Group also welcomed aboard new head chef, Craig Somers, who first started his culinary career at The Silver Darling; he returns with more than 22 years of experience.

As part of the revamp, a new menu majoring in seafood, as well as an increased selection of meat dishes, has been introduced, alongside a “well-balanced” wine list and cocktail menu.

Speaking of the relaunch of the restaurant, which first opened in 1986, Allan Henderson, director of McGinty’s Group, said the firm was “determined to revitalise the restaurant and create something special that would not only complement the surroundings but also provide the city with a memorable dining experience”.

“As a ‘Fittie Loon’, I know many people hold a fond affiliation with the restaurant so throughout the refurbishment, we have tried to retain the venue’s charm and character whilst updating it with stylish features and top quality furnishings,” said Henderson.

“Our new restaurant truly celebrates our heritage whilst providing a relaxed yet sophisticated atmosphere and an unbelievable dining view.”