UNDERNEATH the famous Georgian architecture of Edinburgh’s new town, two of the city’s best-known mixologists are striking out on their own with a fresh approach to cocktails.

Sam Baxendale and Jody Buchan, who have a combined 16 years’ experience in the trade, including spells at some of the capital’s most celebrated bars, opened Kin on the corner of Barony and Broughton Street, in November.

The bar is the realisation of a long-held ambition for the pair, who first met at a cocktail competition in 2010.

Jody’s trade career has seen him serve as a brand ambassador for AquaRiva tequila and Rock Rose gin and work in Edinburgh bars Heads & Tales and The Voyage of Buck, picking up a number of awards along the way.

Sam, meanwhile, crossed from bar and restaurant Monteith’s, just off the Royal Mile, to Queen Street cocktail bar Bramble, where he was promoted to head of the bar team after just six months. 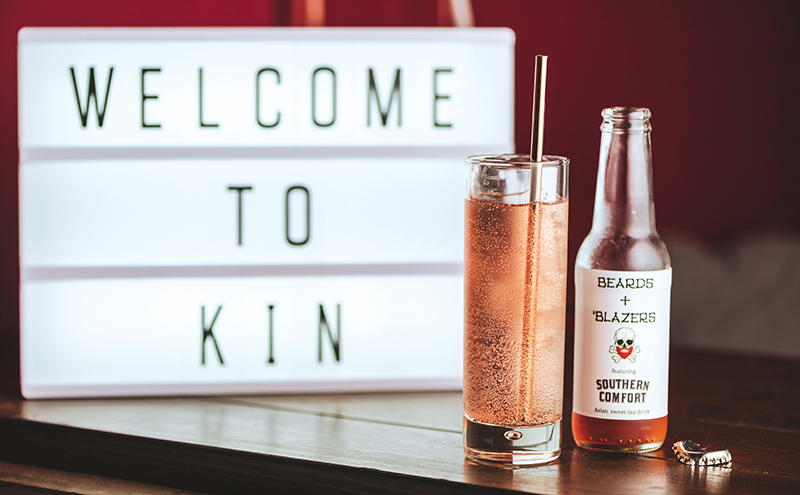 After helping launch Mamasan’s bar and kitchen in Leith together, the pair were keen to do their own thing.

They entered Edinburgh’s Cocktails in the City with their carbonated concoction, Beards & Blazers (pictured below) – a sweet tea made with Southern Comfort – and the drink was voted best cocktail by the event’s judges.

After that, Jody said word of the two’s partnership quickly spread and an opportunity presented itself to them in the form of the empty basement bar beneath Seasons restaurant on Broughton Street, which executive head chef of Seasons, Matthew Urry, invited them to lease.

“We looked at each other back and forth for a while and thought ‘no guts, no glory’,” said Jody.

We looked at each other back and forth for a while and thought ‘no guts, no glory’.

Having taken on the lease, the pair spent five weeks renovating the bar, almost single-handedly, to create a cosy and intimate venue with their approach to hospitality – ‘arrive as friends, leave as family’ – engraved in the nameplate at the bar’s subterranean entrance.

“The reason we laid everything out the way that we did is because we wanted to bring a sense of escapism to the bar,” said Jody.

“So when that door closes behind you, you aren’t in a drizzly city centre anymore, you’re cut off; you need to forget about your worries and relax.

“That’s what we wanted to make, a place where you leave with a better mindset than you came in with.”

Jody and Sam, who both man the bar during its opening times of 4pm to 1am from Wednesday to Sunday, were eager to break with traditional cocktail bar conventions when it came to the drinks list too.

“We wanted to show people who came in the door how to have our kind of fun,” said Jody.

“For the first month, we didn’t have a menu and that threw people a little, but what we wanted to do was make our guests part of it.

“So, for example, sometimes we had groups come in and we said to them ‘tell us your favourite movie and we’ll make a drink based on that’; that kind of thing breaks down the walls of how you are supposed to act in a cocktail bar. 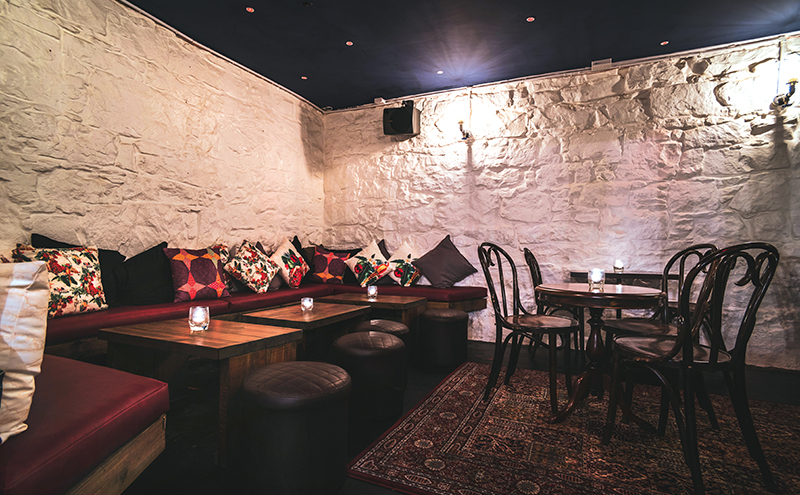 “As it’s just the two of us, we don’t want people to feel like they are walking into just another bar; they’re kind of walking into Sam and I’s second home.”

The pair’s alternative approach to cocktails is said to have gone down well since Kin officially opened on November 15, with the bar trading well over the festive period and, last month, enjoying its busiest week since opening.

Sam puts much of the success down to their fresh take on a cocktail bar.

“So we’ll ask what type of day our guests have had, what mood are they in?” he said.

“A lot of people pigeonhole themselves in terms of what they drink so if you put something different in front of them that they try and like then you’ve got that little bit of trust with them.

“We want to build on that because they have taken a chance coming through the door and we want to reward that with a good experience. So people seem to be receptive to that.

“We aren’t going to list things on our menu firstly as vodka, gin and rum cocktails.

“It’s more about ideas and flavours so we want to execute that in an exciting, accessible and unpretentious way.”

We’re now not following a path set by an owner, we’re creating our own path.

Kin is the manifestation of an outlook the pair realised they both shared after working together.

And Jody said they will continue to develop their ideas about what a cocktail bar should be.

“There’s very few bartenders that don’t have their own ideas about how they would do things if it was up to them,” he said. “It’s something you need to drive progression.

“The exciting thing is we’re now not following a path set by an owner anymore, we’re creating our own path.”