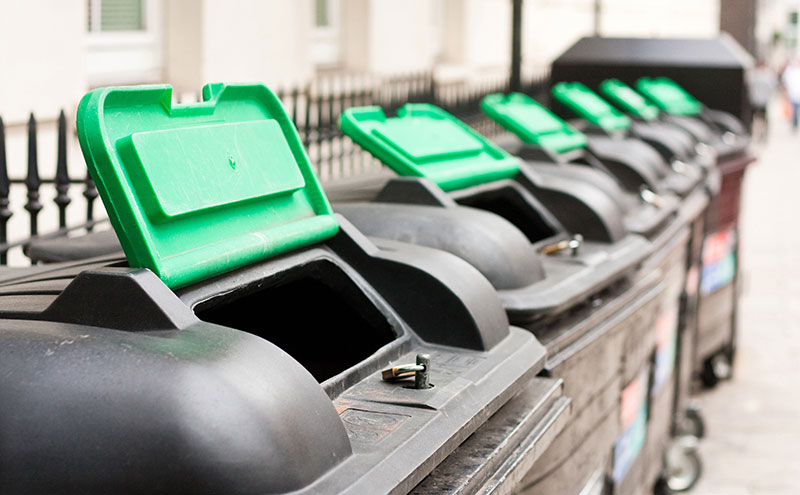 GLASGOW operators have hit out at a new commercial waste policy which will require them to store bins on their premises apart from a one-hour window when they are due to be emptied.

Under the new system, which comes into force in the city centre from April 1 and will be rolled out to the whole of Glasgow in a further three stages between then and March 2019, bins and bags of waste can only be put on pavements and roads for a maximum of one hour during two specific time slots (7.30am to 11am and 5pm to 11pm).

Business owners, who were notified about the changes last month, must arrange a collection time with their waste contractor, ensure all bags and bins are marked with the business name and collection time, ensure waste is placed on the street “only… when the business is staffed and never overnight”, and move emptied bins and any uncollected waste back onto their premises or land within the hour or risk a fine of up to £1000.

The implementation of the new regime, which follows a trial in eight city centre locations between April and October 2017 and comes after a similar scheme was introduced in Edinburgh in 2015, has drawn fire from operators, who say it is impractical for many licensed trade outlets and will cost businesses time and money.

Paul Bright, a director of Bath Street basement bars Howlin’ Wolf (which was included in last year’s trial) and Slouch, said the regime will have a major impact on many businesses.

“Our costs at Howlin’ Wolf went up 30% during the trial; we had to switch to smaller bins and more regular uplifts,” he said.

“At Slouch I don’t know what we’re going to do.

“There’s nowhere for us to keep the massive bins, we can’t keep bins on the premises safely, and we’ve also got stairs that we’ll have to drag bins up and down – it’s just not practical. This hasn’t been thought through.”

Michael McHugh, owner of the Station Bar, also criticised the changes – and the timing of them.

“The council only just wrote to us before Christmas so if you factor that in we’ve basically got 12 weeks to find somewhere else to store the bins, which is short notice for such a major change,” he said.

“If you need to [apply to]make an alteration or structural change in order to store bins that can take nine months; and if you need to replace one of the big 1100-litre bins with four smaller bins then costs are going to go through the roof.

“There’s also obvious health and safety issues with moving bins and with storing rubbish on the premises.”

A spokesman for Glasgow City Council said: “The next phase of the project will look for compliance, within the city centre boundary, by April 1, 2018. This is 24 weeks from the date of approval by the council.

“A further three phases will be implemented until the city is compliant by March 2019. We feel this is reasonable.

“If a business requires to make structural changes to accommodate storage of bins which requires planning permission, GCC – as we have done during the pilot phase – will work with them to ensure they achieve compliance within an agreeable timeline.

“The new procedures may result in an increase in costs for some businesses, so we would encourage businesses to visit our CWP webpage which provides information/advice on how revaluating and reducing your waste can reduce outgoings while also contributing to a cleaner, more sustainable environment.”