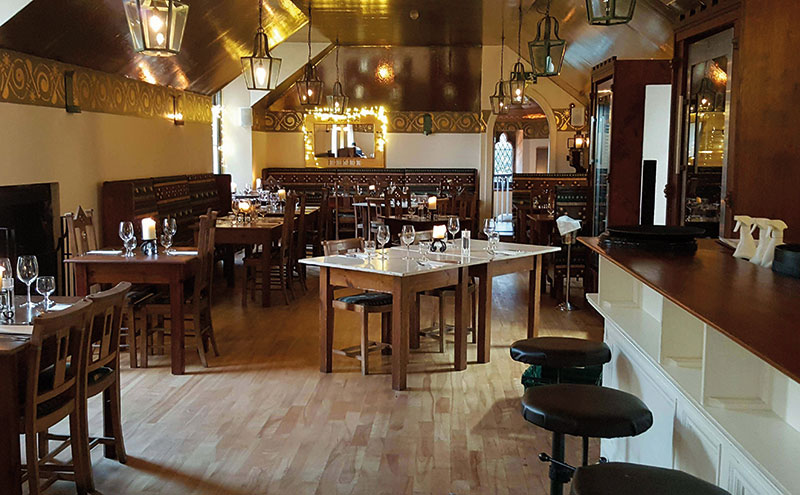 At just 26 years old, Leiper undertook the prodigious task himself (aside from artist/designer Daniel Cottier’s involvement with the stained glass and stencil decoration), which is thought to have cemented his reputation and paved the way for his architectural career.

More than a century later and having fallen into a state of disrepair, Dowanhill Church was sold to the Four Acres Charitable Trust in 1984, which restored the category A-listed church that today stands as multi-purpose venue, Cottiers.

David Robertson, director of the Four Acres Charitable Trust (which also owns fellow Glasgow venue Websters, both of which are run with restaurateur/consultant Billy Mcaneney) told SLTN that with Cottiers, which first opened in April 1992, named after Daniel Cottier, Leiper has “taken a bit of a back seat” over the years.

William Leiper is one of Glasgow’s most distinctive architects and designers.

Seeking to redress the balance, David had the idea of opening a restaurant that paid homage to William Leiper himself – which led to the creation of Leiper’s Attic.

Noting that Leiper “is probably Glasgow’s third most distinctive architect/designer after Macintosh and Thomson”, Robertson said it was important to create a restaurant that had an affiliation with the architect.

As its name would suggest, Leiper’s Attic is located in the rafters of the building – and its inception was well-timed.

With Cottiers’ business as a wedding venue booming, the loft space was used as an overspill for the bar area downstairs.

But, when changes were made last year to accommodate wedding functions more efficiently, it was decided that the attic was the perfect space for an eatery that could stand on its own two feet.

Andy McCartney, operations director, who joined the team last May having previously worked for the likes of Mitchells & Butlers, Hilton and G1 Group, said it was important that Leiper’s Attic had its own identity from the get-go – in everything from its own entrance (via an impressive spiral staircase) to separate social media.

“Even though it’s operated within the same building, we’re trying to launch it as a separate entity almost,” he said. 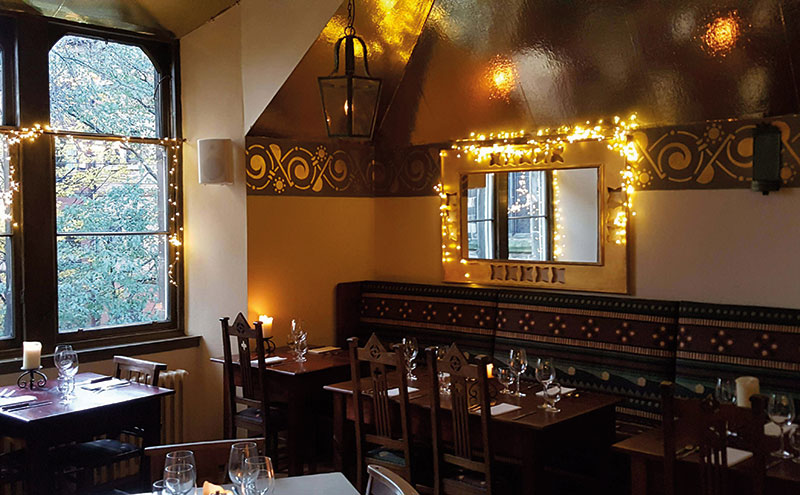 Key to this was the restaurant’s design, which is underpinned by historical ties to both Leiper and the building itself.

“What’s important to David is not losing the identity and the aesthetics of the building – and staying true to [its history],” said McCartney.

While the physical space was largely unchanged during the four-month refurbishment, which was carried out between May and September last year, new furniture, which is hand- built by Cottiers’ in-house tradesman, features throughout – and is itself designed to tie in to Leiper’s later work, which included the design of hunting lodges.

Nods to Cottier are also present.

Two chargers from Daniel Cottier’s company (established after his collaboration with Leiper) have pride of place in the 66-cover restaurant.

Leiper’s Attic also has its own bar and two cabinets for dry-aged meats, which are instrumental to the new restaurant’s food offer.

Designed from the ground up by head chef Graham Gardner, who joined the team last June, the menu aims to showcase the best of Scotland’s larder.

Specialising in dry-aged steak, game and wild fish, the food offer is changed every three months.

“Our aim is trying to use as many seasonal products as we can – do our best with it, without messing around with the [ingredients] so much,” said Gardner.

The head chef works closely with local suppliers including G.H Davidson (meats), The Fish People (fish), Glasgow Fruit Market (fruit and vegetables) and J Mellis (cheese); and he said these relationships are key as he moves forward with his wider aspirations for the restaurant.

Our aim is to use as many seasonal products as we can – and do our best with it.

“The main thing I want to achieve here is to be one of the best in Glasgow,” he said.

“A place that, if somebody wants to go and eat, they’ll automatically think ‘Leiper’s Attic – that’s what I’m after’.”

The drinks range has also been tailored to match the menu. For instance, the wine list is designed to go with the ‘big flavours’ of dry-aged meat and game.

With positive feedback on the restaurant so far, McCartney said the team of eight staff is preparing for a visit from the AA – and hopes to gain rosette status.

Beyond official recognition, however,  paying homage to the building’s historical links and offering customers something different lies at the heart of Leiper’s Attic’s offer, according to McCartney.

“[We’re] just trying to stand out from the crowd a little bit,” he said.