WHEN Stephen Marsh, founder of Ginmeister, the firm behind gin brand Pinkster, set out to create a spirit using fresh raspberries he was initially warned against it.

But Marsh stuck to his guns and, four and a half years after its launch, the brand – which has introduced a limited edition Valentine’s Day bottle for the second year in a row – is in fine fettle.

The gin is now stocked by wholesalers in Scotland that include Matthew Clark, Gordon & MacPhail, Inverarity Morton and Enotria; and, despite the influx of new gins in the past couple of years, has managed to more than hold its own in the marketplace, according to the company’s Scottish-based director, Will Holt.

“That helped us, from a commercial point of view, accelerate growth, cope with burgeoning demand and invest in more infrastructure and more people.”

Holt said it had been “a lot of hard graft” establishing the brand in the on-trade, with appearances at trade shows and festivals coupled with building relationships with wholesalers and other trade partners.

“As a brand, we don’t have deep marketing budgets at all, so building up loyalty and awareness in trade channels is really important for us,” said Holt.

“But we’re beginning to feel like, four and a bit years in, we’re almost the veritable old timer.”

Pinkster’s distinctive pink colour is derived from the fresh raspberries used in its production; but the brand isn’t the only pink gin in the market, and Holt said he sees pink gin becoming a distinct sub-category in its own right.

For the on-trade in Scotland, pink gin is a genre that people are thinking about now

And he reckons the addition, last year, of a pink variant to the line-up of Diageo’s gin giant, Gordon’s, could be good news for smaller producers; he argued that Diageo’s marketing will create a “halo effect” for other pink gins, helping to raise the profile of the sub-category with trade and consumers alike and, ultimately, leading to more bar calls for pink gins.

“For the on-trade in Scotland, I think it shows that it’s another genre that people are thinking about now, whether it’s us because it’s got raspberries in or someone else because it’s got other berries or other products in.”

In the meantime, Pinkster isn’t resting on its laurels.

The company has launched two products using the raspberries left over from the production of its gin – Boozy Berries and Gin Jam – as well as a range of fruit gin liqueurs under a standalone brand, Hedgepig.

Holt said the jam and the Boozy Berries have been “a useful tool to help us in the on-trade”.

“It reinforces the fact we’re made with fresh fruit and it just gives another (angle), whether it’s Gin Jam teatime tipples or pimping up your Prosecco with a Boozy Berry, it gives the trade something else to play with,” he said.

Hedgepig, meanwhile, allows the firm to experiment with different types of fruit.

The range currently comprises two expressions: Wild Bullace and Quince (30% ABV) and Rampant Raspberry (33% ABV), with three more liqueurs to follow in the course of 2018.

It’s clearly been an eventful couple of years in the world of gin, but Holt is optimistic that demand for the spirit will remain high in Scotland’s bars and pubs.

“All good things will come to an end at some point,” said Holt.

“But if you look at all the research data and Mintel stats, forecasts still remain very bullish up until 2020 and beyond.

“I think there probably will be a bit of a drop in the rate of openings and launches of gin brands.

“But there seems to be no slowing (at the moment).” 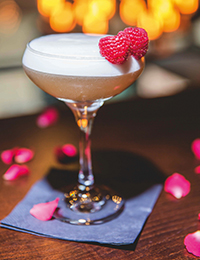 Method: shake hard to create the foam layer and double strain into a Martini glass. 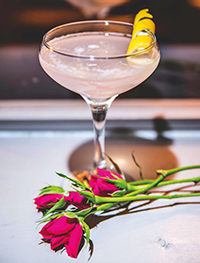 Method: shake and double strain into a Martini glass.